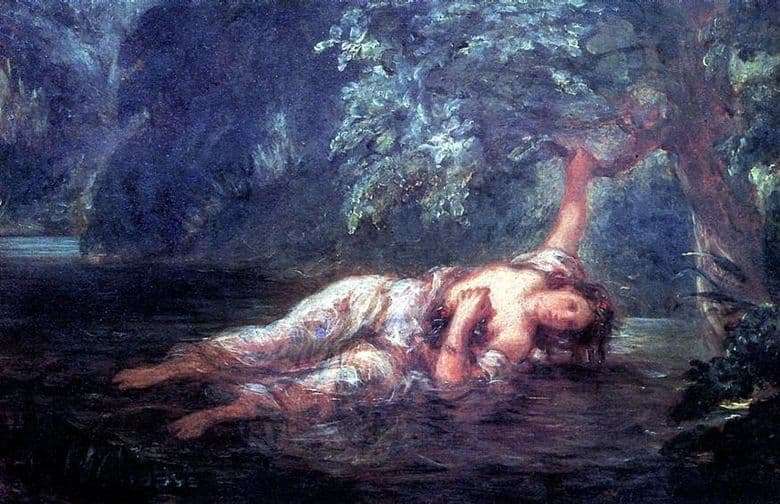 The picture is based on an episode from the tragedy of William Shakespeare’s “Hamlet”. Eugene Delacroix was always interested in the secrets of the soul. Depicting Ophelia, who is in a state of semi-delirium, he tries to comprehend the human essence. Like many romantics, Delacroix believed that it was in a state of insanity or death throes that deep-seated human experiences emerge.

It is impossible not to note the originality and special energy of the artistic world of the picture. In drawing the landscape is dominated by blue and green colors. But thanks to the intricacies of their shades, the work of Delacroix does not look bleak. On the contrary, it turns out relief and dynamic. The outlines of the trees, the exact image of each leaf, the calm waves running along the water surface, give the picture an extraordinary vividness. It seems a little more – and you can hear the splash of water and the song of crickets. Nature is calm. Silence and peace reigns all around.

There is no peace in Ophelia alone. In her eyes read despair and hopelessness. The feeling of inexpressible longing is also reflected in the unnatural posture of the heroine. The artist as if caught the moment of Ophelia’s fall, and now, thanks to the skill of the artist, she is reclining in cool waters. Another moment – and the heroine will release from her hands a sprig of a tree, symbolizing her life. We see a woman a second before her obedience to the ancient element. And therein lies the dramatic tension of work. It is noteworthy that the body of Ophelia and the trunk of a nearby tree are, as it were, illuminated by moonlight. The soul of the heroine is like a flame, ready to go out and become part of the dark night.

The holiday of beauty, grandeur and immortality of nature comes into resonance with the state of mind of Ophelia and only increases the tragedy of the situation. Delacroix shows how lonely and fleeting human life.