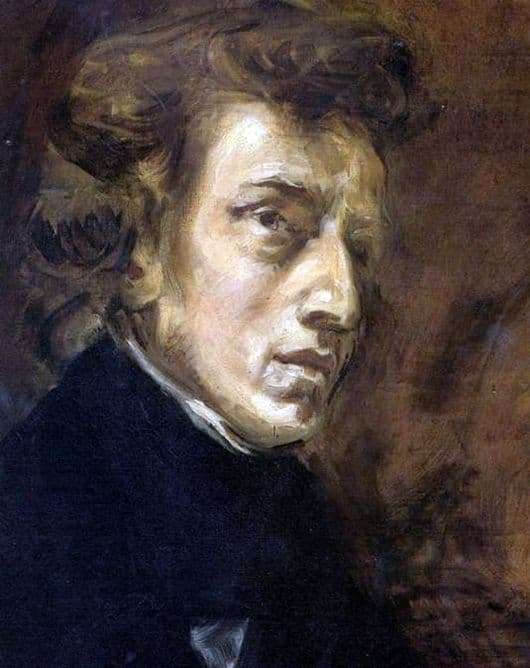 The unfinished portrait of Frédéric Chopin was painted by the French painter Eugene Delacroix in 1838. This portrait is not the most crucial role in the artist, but at the same time is very interesting for many reasons.

Firstly, this portrait was created by the author not for an order, but solely for personal reasons. The fact is that the Polish composer was a close friend for Delacroix, which means we can see the portrait created by a talented artist who personally knew the object very well and treated him very warmly. In addition, the picture depicts a man whose skill as a composer is at the level of the greatest composers of all times and peoples, which undoubtedly causes a certain interest in his personality.

So, in the picture with bold strokes a very charismatic image of Chopin was created. His deep brown eyes are filled with a bright and strong mind, which has yet to give birth to many more musical masterpieces. Masculine cheekbones, a crooked nose and wavy hair create a single image of a person extraordinary, impetuous and expressive. The hero of the picture is as if in tension from a long posturing, because the romantic soul requires activity, immediately create!

In Delacroix, until his death, life was in full swing, the desire to create canvases that would amaze all contemporaries. Perhaps in this he was like Chopin. And perhaps many similar views of the world and creativity were among these two great people.

The artist painted a large number of portraits, was engaged in monumental painting, and many of his canvases were recognized as rebellious and too bold… Because of this opinion in official circles, the greatest master was not allowed to teach his element – art. And among the many paintings of Delacroix, this portrait, which is the most famous among the portraits of Chopin, was never completed, which only makes one think how amazing this work could be.