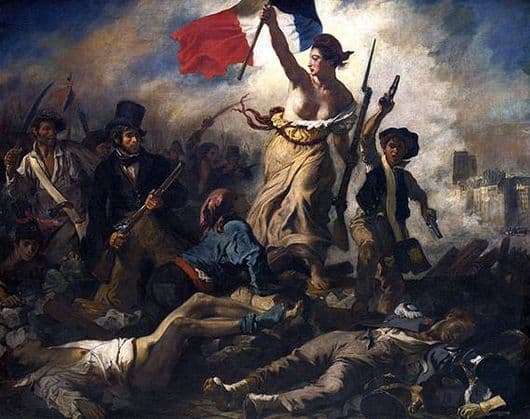 Later, the picture of Eugene Delacroix, written by him in 1830, began to be called “Freedom on the barricades”, but initially it was called “Freedom leading people”. Sometimes there was a mistaken view that the canvas was created under the influence of the French Revolution, however, in fact, Delacroix dedicated the plot to the events of July 1830, when violent street battles took place in Paris that led to the overthrow of Charles X, the last of the Bourbons, fiercely hated the population of France.

Young Eugene Delacroix, who positioned himself not as a revolutionary, but as a rebel, inspired and intoxicated by the fresh air of freedom and accomplished victories, set about trying to paint a picture of those bloody days and feats of his people. It took the artist three months to complete his task. after which the “Freedom leading the people” appeared to the gaze of the admired public. The plot of the canvas tells about a fragment of a hot battle, where a detachment of armed rebels through the bodies of their dead comrades and through the whistle of bullets makes their way to the intended target. Ahead of all, with the tricolor flag of the French Republic raised in one hand and with a gun in the other, is a woman.

This is Freedom, attracting people to attack. It has a Phrygian cap, characteristic of the Jacobins and a naked chest, which symbolizes the fierce desire of revolutionaries to go bare-chested on the royal bayonets. The painter’s brush irreproachably highlighted the various costumes of the rebels, indicating that representatives of various sectors of society fought shoulder to shoulder on the street barricades.