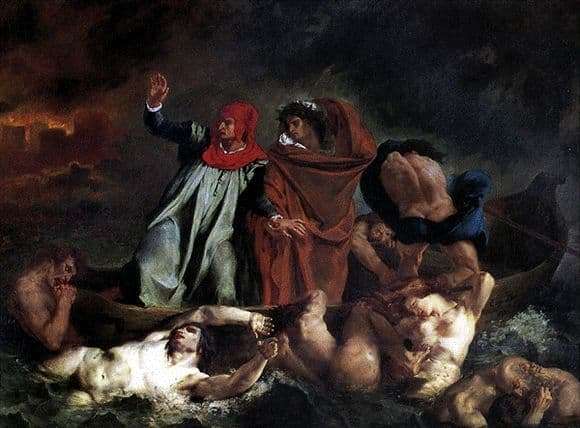 Eugene Delacroix is rightfully considered the founder of French Romanticism. Most of his works are intense epic scenes, made in rich contrasting colors, not characteristic of neoclassicism that still dominates in France at the beginning of the 19th century. The origin of Eugene Delacroix is still shrouded in mystery, according to one version, he is even considered the illegitimate son of Napoleon.

The early death of parents makes the young man look for ways to education, and the School of Fine Arts in Paris becomes for him a kind of alma mater. A talented, hardworking and reckless, Eugene already in his youth acquires eminent friends, among whom were Alexander Dumas and Richard Bonigton. But the most powerful influence on the young artist was the work of Theodore Gericault. His picture “The Raft” Medusa, which became sensational in 1819, was influenced by the real tragic events that were widely discussed at that time on the frigate “Medusa”, for which Eugene even posed, impressed the future master of romanticism so much that three years later Delacroix creates his canvas ” Dante and Virgil “, which, in the opinion of critics and art connoisseurs of those years, had a clear stylistic similarity with the scandalous work of Gericault.

The canvas is written on the theme of the 8th song of Hell from Dante’s Divine Comedy, where the poet tells his vision of the passage with Virgil through the circles of hell. On the eighth lap, they had to cross the swamp near the dead burning city of Diet, where tormented sinful souls suffered in the muddy waters. The picture captures the moment when Dante, in one of the sinners distraught by torment, trying to get into the boat with his last strength, recognizes his personal enemy and throws up his hand in surprise and terror, as if trying to distance himself from it. Virgil wants to reassure the poet and holds him by the other hand.

The whole plot of the picture is filled with dynamics and emotional heat. The “wrathful” ones, clinging to the boat, are captured in different angles and poses – someone with bestial anger and bitterness almost climbed aboard, others, exhausted, gave themselves limply to the tightening water flow. Their naked bodies are spelled out in light tones in contrast to the dark water and the broadside of the boat, and this reinforces the inexplicable feeling that they will continue to move, just look away. The bent tense back of the villain’s ruling villain, Phlegia, next to the impassive with Virgil, adds to the sinister moment.

Despite the accusations of adherents of academic classicism in the weak pictorial technique and inconclusiveness of the contours of figures, contemporaries unanimously acknowledged that the picture debuted.