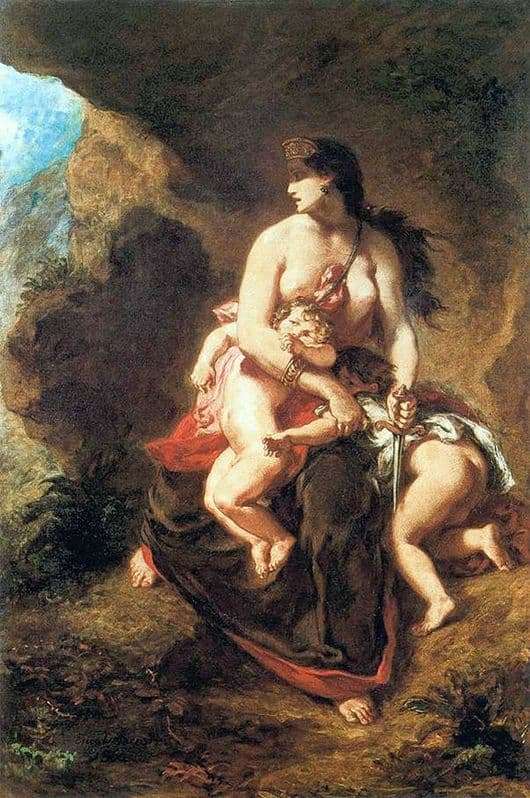 The plot is taken by the artist from the famous tragedy of the ancient Greek writer Euripides “Medea”. ” The image of Medea is known to us from ancient Greek myths and legends. The passionate and strong-willed Queen Medea was the keeper of the Golden Fleece, a symbol of luxury and power. Jason, drawn by a passionate desire to get the Golden Fleece, went with the Argonauts on a long and difficult path.

In the palace of Queen Medea, he succeeds in overcoming all sorts of obstacles and witchcraft, as a result of which he not only gets the Golden Fleece, but wins the woman’s indomitable heart.

A woman in love is surrendered to the mercy of the winner. And soon produces two beautiful children. For the love of the hero, the queen refuses power, leaves her kingdom and flees with Jason, but here in exile she will face cruel treachery. Corinthian king Creon, who learned that Jason has a magical fleece, offers to give his wife, the princess Glaucca, to his wife, secretly wanting to get a relic.

Jason, without thinking about what is throwing a lover with children, agrees… Medea, infuriated and distraught with pain, plotting a terrible revenge. Left alone with the children, she puts the monstrous plan into life and with her own hands kills the fruits of her insane love – two beautiful sons.

Delacroix, who belonged to the mainstream in the 19th century – the romanticism, took this tragic plot for his picture. The picture is written according to the canons of the time. On it we see a queen with two sons, on her face is not either rage or fear. She looks around, as if looking for support, excuses for what he is going to create now.

With one hand she holds her sons. One of them hangs on her hand in a ridiculous, uncomfortable position. The child is scared, trying to escape. She grabbed the other boy by the arm and pressed her to him so that he would not run away, and he cast a glance at what was happening, full of bewilderment. And he sees a knife tightly clamped in his mother’s hand…

Delacroix succeeded in transmitting all the horror and inevitability of what is happening in these postures and gestures. He created a very vivid emotional image of an abandoned woman who, in the name of revenge, is capable of even taking such a step as infanticide.