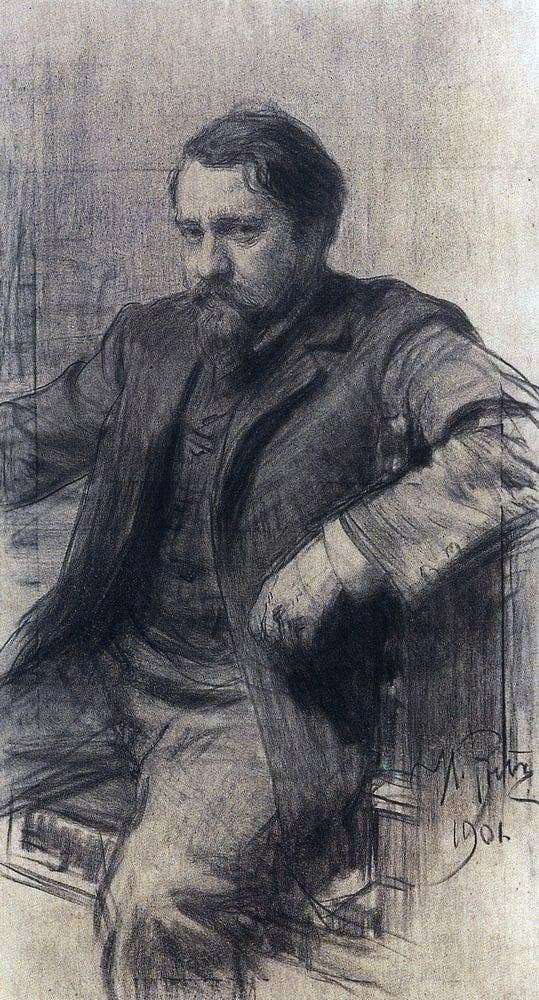 The first meeting of artists Ilya Repin and Valentin Serov happened when Serov was not even seven years old. When Valentine’s father, a famous musician, passed away, Repin came to his funeral. A year later, Valentin began drawing at Repin’s workshop. Subsequently, Repin greatly appreciated Serov’s talent as a painter, noting also his irrepressible hard work and perseverance. Since childhood, Valentine has shown remarkable abilities, which with the help of his older friend were strengthened from year to year.

Friendship artists carried through life; funny that in their work there are paired paintings, for example, “Portrait of Sophia Dragomirova.” Apparently, the artists painted it at the same time; the young woman in the portraits of Serov and Repin is depicted in the same, very remarkable, dress and in the same pose.

Naturally, the friendship of the two artists could not help but result in drawing each other; There are two famous portraits of Repin, drawn by Serov and two portraits of Serov, painted by Repin. Portraits of Serov are not very different from each other, although between them lies four years; it may seem that the same sketch is rotated mirror and slightly modified.

Repin draws Serov a little fat, awkward man, solid and serious; the artist looks directly at the viewer, but slightly under his brows, as if hesitating. His hand is on the arm of the chair, his head is slightly pulled in the shoulders. Despite the official, with a jacket and vest costume, worn on Serov, the portrait seems intimate and homely, not ceremonial – only a close friend of the hero could portray the hero.