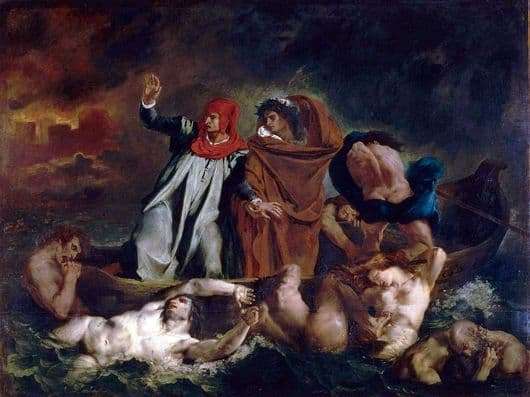 Delacroix borrowed the plot for his famous “Rook” from the legendary “Divine Comedy”. Thanks to this work, the artist was marked by the first great achievement in his 24 years. The very name of the canvas already contains a reference to the symbolism of the written image. After all, even the ancient ancestors of the boat, as a rule, associated with the beginning of life. Moreover, on the boat made a move to another world, etc.

The image of the boat for many centuries considered a symbolic image of Christianity and in particular the church, in the pictorial performance of French romantic artists, acquires an updated symbolic meaning.

On this canvas one can clearly see the creative credo defined by Delacroix for a long time. The essence of which was to worship the legendary masters of the words of Dante and Virgil. At that time, they were considered symbols of the cultural heritage not only of their epochs.

Images of sinners, who so zealously cling to the side of the boat in the hope of salvation, are written on the basis of impressions from the sculpture by Michelangelo’s “Night.” And from the traditionally baroque influence in the picture, the tragic sound of the “Jellyfish Raft” is clearly traced.

Among the sentenced sinners who are trying to get into the boat, some show maximum bitterness, incredible malice, others, weakened by a hard struggle to get into the boat, exhausted all their strength and gave themselves up to the power of the waves. According to the artist himself, the best he managed to write the image of a sinner, almost got into the boat, that in the background. And it was written, as can be seen from the d entry in the diary, incredibly quickly and with great inspiration, while reading the poetry of Dante. The picturesque genius of Delacroix breathed new vitality into a classic literary story. Without finally getting rid of the classical ideal, the author writes a truly romantic canvas that embodies the cruel world of unbridled power born in his imagination.