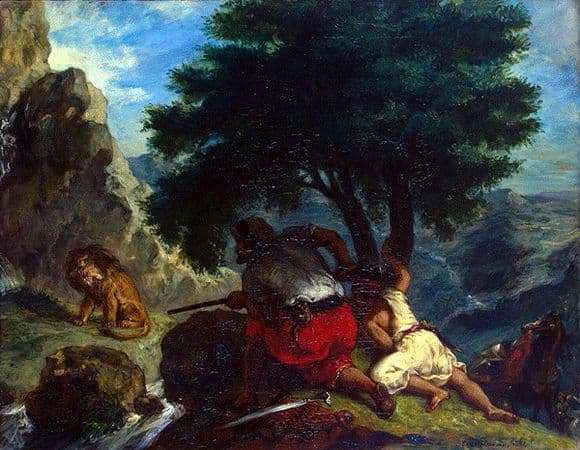 His picture “The hunt for lions in Morocco” Delacroix wrote in 1854, according to the memoirs of twenty years ago on a trip to East Africa. The style of painting, the emotional tension of the captured scene of preparation for the battle with the beast of two hunters is quite typical for Delacroix, but it stood out vividly among the adherents of classicism that still dominated the art of France in the mid-19th century.

Most of Eugene Delacroix’s works write on literary or historical plots, especially the artist’s impressive ones, choosing the moment of the apotheosis of an event or a certain anticipation of a climax, when all the participants in the scene – both nature and people – are still in turmoil before the last minute, guns are charged, glasses of poison are prepared.

So the hunt in Morocco repelled a second before the scramble of people with enraged lions. Two hunters settled down in an ambush under a tree on a small rocky cliff near a mountain river. Their bright red and almost snow-white robes contrast sharply with the shadow of a tree and rocks, a few unnatural bends of hands and feet, a naked blade in the foreground of the picture – all this underscores a pent-up energy cluster that in a moment goes into a heavy duel with a beast with an unpredictable outcome. . Under the cliff, two more Arabs are trying to calm the horse, torn from fear. The blinding blue sky and mountain stream cut the deep shadow of the tree and rocks, disrupting the overall light balance of the image, which enhances the dynamism of the plot against the background of the pacifying mountain landscape.

While working on the picture, Eugene Delacroix makes sketches for his big “Lion Hunt”, the theme of which he chooses again, for the World Exhibition in Paris in 1855. Thus, the founders of romanticism, traveling to exotic countries, brought a new vivid style and unusual stories to the culture of the academic old world