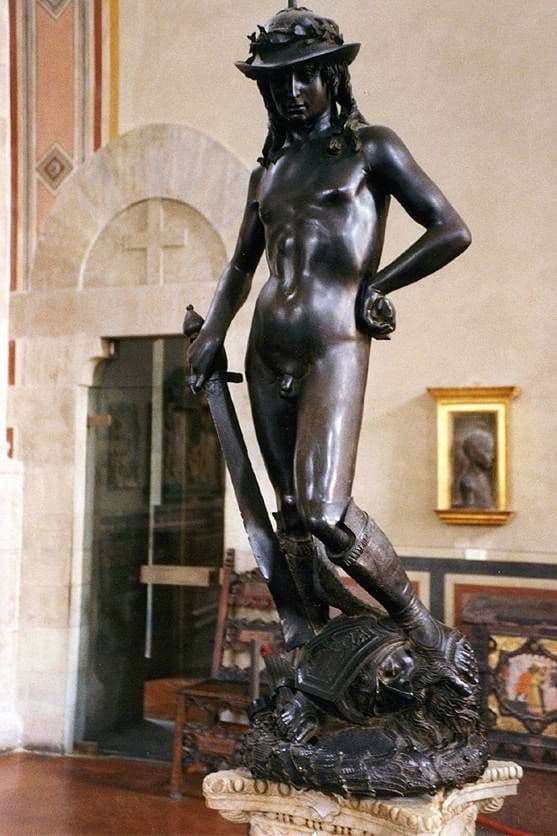 “David” is one of the great sculptures that embodies so many meanings and questions that worried people in the 15th century. This is a statue that was the beginning of the revival of the cult of the body. Not clarified is the question of the time the creation of this masterpiece. Most art critics date the sculpture 1430-1440 years.

With his work, the Italian sculptor Donatello repeated the image of a man traditional for ancient times. Contrapost was chosen to serve the figure – a very relaxed posture, when the weight falls on only one leg, while the other is slightly bent. This gives the sculpture a sense of movement.

During the Renaissance, this figure seemed remarkably alive compared to what a medieval sculpture looked like for centuries. It has a clear connection with antiquity in another aspect – in its material nature. The sculpture is made of bronze with a small addition of tin for durability. The statue was created using a technique known as casting, which was once used by the ancient Greeks and Romans. “David” is a young man, the future king. He stands on the severed head of Goliath, holding a sword in one hand, a stone in the other. It is not difficult to notice a certain sensuality in the way he laid his hand on his hip and looks down.

It should be noted that the sculpture was very important for the city of Florence. For the inhabitants of the city, this was not just King David from the Bible, but various associations were associated with him. First of all, they saw in it a symbol of freedom and privileges that Florentines so appreciated.

In the 1460s, she stood in the Medici garden, although it is not known who ordered this work for Donatello. When the dynasty was expelled from the republic, the statue was placed in the city administration and became available for viewing by everyone. In the second half of the XIX century, the sculpture was given to the National Museum of Florence and occupies a special place among other exhibits.