Home ⇒ 🎨Monuments ⇒ Description of the statue “Buddha of the Spring Temple” 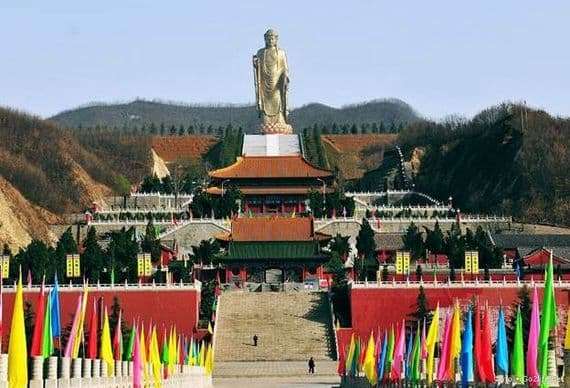 The Buddha of the Spring Temple is the largest statue. It is located in China, near the town of Zhaotsun. The idea of ​​erecting the monument arose after the blasphemous behavior of the Taliban, who blew up 2 huge statues of Buddha in Afghanistan.

The Chinese condemned this act and decided to create something unique in honor of their patron. The Chinese responded to the fulfillment of the task with great enthusiasm: their Buddha became the largest monument in the world. The Buddha of the spring temple is a statue with a height of 128 meters. The figure of the Buddha at the same time is 108 meters. Together with the pedestal, the monument rises to 153 m. The monument to the Buddha of the Spring Temple was erected in 2002, after which all Guinness Book records for the height of the monuments were broken.

The statue was made in several stages by combining individual elements. Components of “parts” were more than 1000 pieces. 108 kg of gold was needed to recreate the idea of ​​sculpture. Copper (33 tons) and steel (15 thousand tons) were also used in the manufacture. In general, the tremendous beauty cost the creators $ 18 million.

Interestingly, at the foot of the Buddha sculpture of the Spring Temple, visitors climb the stairs of 365 steps, located in 12 spans. Lotus petals make the foot of a huge sculpture made in the form of lotus petals, which harmoniously emphasize the symbolism of the statue.

The majestic Buddha with wisdom in his eyes looks at all who come to him for advice. The gilded silhouette is visible even in the thickest fog, and the mighty green slopes behind the Buddha’s back create a harmonious contrast. Peace and balance, true harmony and peace of mind reigns here. Thousands of people come to a small Chinese town to feel it inside themselves.