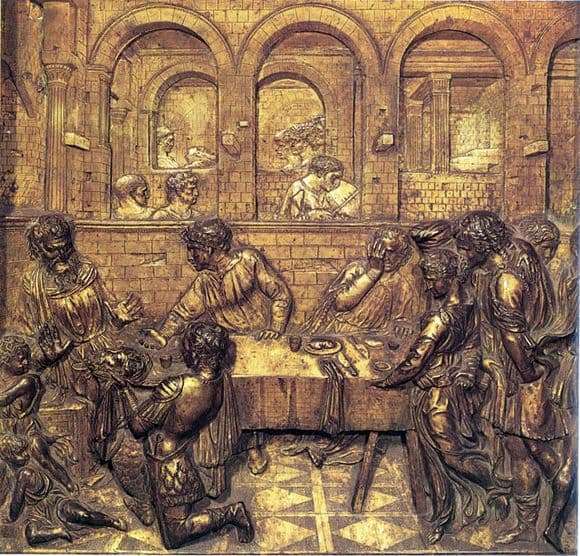 The baptistery font in Siena, Italy is decorated with bronze reliefs of several venerable masters of the art of the XV century. The work of Florentine Donatello is distinguished among them by the special nature of building perspectives and creating relief.

“Herod’s Feast” was created within five years and was completed by 1427. A bronze picture of the biblical story about King Herod and dancing Salome depicts a bronze picture. The woman agreed to perform a dance in front of the king if he brought her the head of John the Baptist. The labor scene of Donatello implements what is written in holy writings.

The image is divided into three distant plan. A perspective built picture tells the audience a story. The most distant plan shows a newly arrived warrior with the Forerunner’s head severed; he shows a trophy to young soldiers who met him in a brick corridor, they are in disarray from what he saw.

The average, more close to the viewer plan represents a neutral scene: a peace-playing musician and two invited to the feast. And finally, the main one – the foreground is filled with the greatest number of characters and is the most emotionally colored. The squire squatted down and stretched the plate with the head of the Baptist to Herod, who in horror waved his arms.

The nearby children are in a hurry to hide from the monstrous spectacle. One of those sitting at the table reproaches the king for a wild order, the other – in fear covers his face with his hand. Salome and those nearby are surprisingly calm and just interested. The dancer is plastic and graceful, unlike other figures, therefore she is immediately recognizable.

The heroes of the front scene are most voluminous, the prospect is readable thanks to the evenly decreasing squares of the tile on the floor of the picture. At the relief of Donatello, the space masterfully smoothly unfolds, as well as the subtlest gradation of the volumes of the figures.