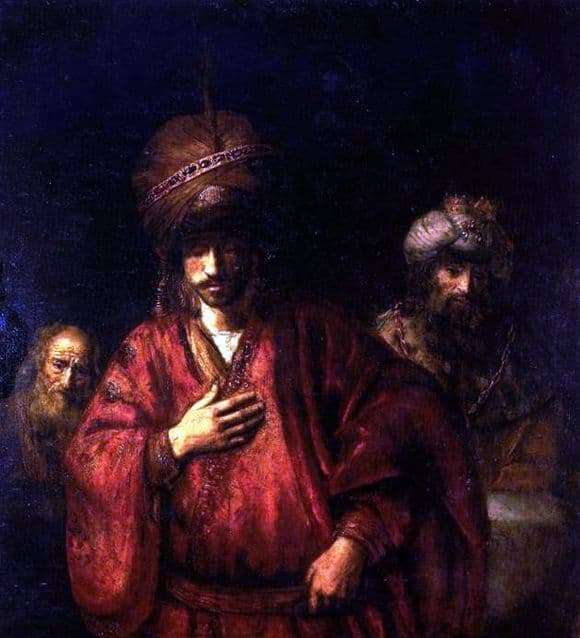 Rembrandt Harmens van Rijn is a Dutch artist whose paintings are distinguished by the versatility of selected subjects and the techniques used. Of particular interest to the artist were biblical stories, which corresponded to the piety of the society in which he lived, and allowed him to continue to experiment and search for new approaches to classical subjects. As a result, many of these works have been the subject of fierce disputes and discussions.

One of these canvases is known as “David and Uriah” or “Haman recognizes his destiny,” the painting dates back to 1665. The plot is a tragic story of betrayal and loss. King David, wishing Bathsheba – the wife of his warrior Uriah, seeks to eliminate the opponent. He decides to send Uriah to the place of the most bloody and fierce battles. The king invites the doomed to never return home to the legitimate consort of Bathsheba to hand him a letter with a terrible sentence.

Occupying most of the picture and the highlighted character – the brave warrior Uriah – embodies mental turmoil and tension. The man’s face is still and pale, his eyes are closed.

The figure is shifted to the left, and the pose itself creates the feeling that the unfortunate one is about to fall under the weight of the misfortune brought down on him. Robes embroidered with gold threads and decorated with jewels are chained and crushed, and rich maroon-red shades of fabric seem to indicate the bloody end of their wearer. Arrangement of hands increases the feeling of precariousness and loss of character. The right hand is pressed to the chest, seeking to alleviate the pain of the heart, or, perhaps, pressing the unfortunate letter of death. With his left hand, Uriah clings to his belt, trying to keep his composure even at the moment of encountering despair and loneliness enveloping his soul.

The figure of David on the right is made by Rembrandt in cold tones, thereby enhancing his opposition to the fiery bright tones of Uriah’s clothes. The king’s gaze is set aside, his head bowed, allowing for the thought of repentance because of his evil deeds.

The seal of the highest sorrow and irregularity of what is happening froze on the face of the old man on the right. This scribe, who became an unwitting accomplice of the crime. According to one of the many versions, art historians believe that this is the prophet Nathan, who wanted to try to reason with David and prevent the death of Uriah.