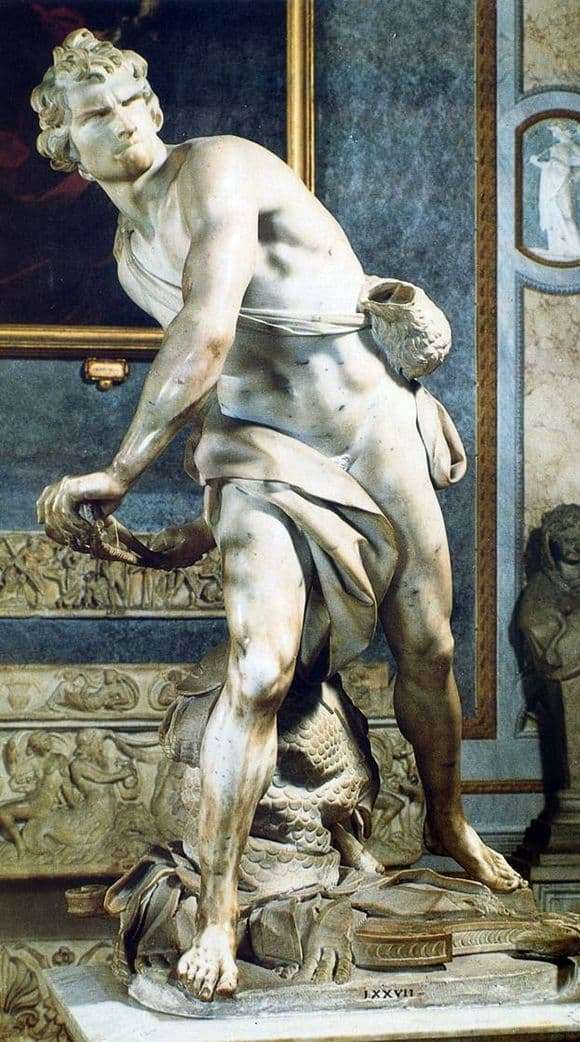 As they say in an ancient legend written in the Bible, a young and courageous young man, David, with a stone that he released from a sling, killed the formidable giant Goliath. And during the times of the Renaissance, many artists and sculptors took this story as the basis of their creation.

The image of David included power, nobility and showed heroism in all its glory. Therefore, in the compositions of the fifteenth century showed him the winner.

Bernini in his work showed a slightly different direction: dynamics, mental tension and movement. His statue captures the episode of the battle itself.

Bernini put his creation in a row with famous works. He showed David, who was preparing to attack, gathering all his strength and will. The statue looks at the enemy, intense and hating eyes.

The young man is serious: his eyebrows are frowned, his lips are bitten. His pose is tilted, his head is slightly back. David swung, aiming at his opponent. The statue depicts a rebel who lives a hectic life filled with drama. Bernini did his work in the early baroque style.

The sculptor tried not to imitate the Pergamon Altar. Bernini created his work not as a separate figure, but as a pair composition. It focuses on the enemy of David. By the look and posture of his immediately understand where his opponent. The space between them has a certain charge belonging to the statue. This is the difference between the work of Bernini and classical baroque.

In the seventeenth century, his statue attracted much public attention. It includes the illusion of the living presence of heroes. And also looking at the figure, you can immediately understand what the hero will do next. You can read all the emotions and feelings of David on his face, so the author was able to clearly fashion and perpetuate them.