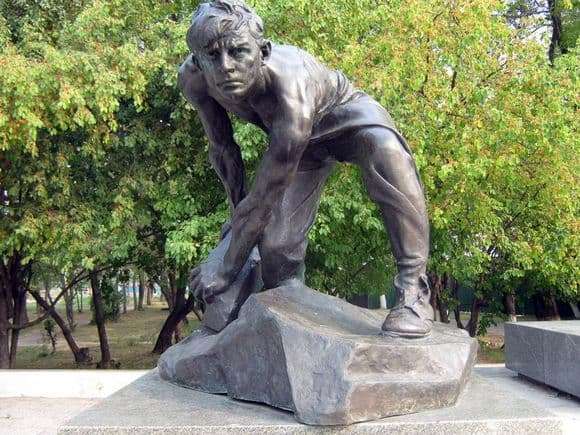 In Moscow, in the Park of the December Uprising there is a bronze sculpture called “Cobblestone – the weapon of the proletariat”. Its creator is Russian and Soviet sculptor Ivan Dmitrievich Shadr, who worked at the junction of two eras.

This work is one of the best examples of realism of the Soviet period. The sculpture is a collective image of the representative of the proletariat, ready to fight with its oppressors. This is the figure of a worker who breaks out of a cobblestone pavement. He looks with hatred towards his enemy and is ready at any moment to launch into it with his cobblestone.

The sculptor created a figure not a soldier or a murderer, but a simple hard worker, an honest man who was desperate in the current situation and ready for anything to fight. This proletarian did not plan to fight against those in power, did not develop a strategy and tactics. He has no weapons, and he hardly knows how to use them. All that he can oppose to his enemies in the struggle for freedom is the usual cobblestone from the pavement.

His work Shadr fashioned with high precision, observing all the anatomical proportions. The sculptor worked on the work in accordance with the canons of classical sculpture – all art critics note this. In addition to anatomical accuracy, the same expression can be traced in the worker’s figure, which marks classical samples of antiquity such as “Diskobol” or “David”.

At the same time, classical sculpture is saturated with modern content – the hero of the revolutionary period, who is ready for everything for the sake of freedom and the overthrow of an unjust order. Interestingly, Shadr’s contemporaries did not favor his sculpture, accusing the author of artificiality and unnaturalness.