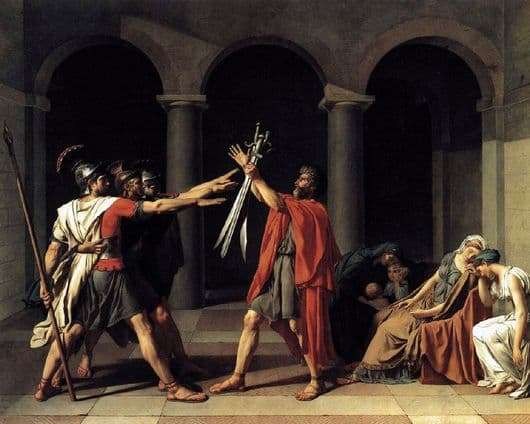 “The Oath of the Horatii” – a large painting, written by French artist Jean-Louis David in 1784. The painting is currently in the Paris Louvre. As soon as the picture came out from under the master’s brush, it immediately gained a great success, both among the public and among critics. The painting “The Oath of the Horatii” remains one of the most famous paintings – representatives of the neoclassical style. The painting depicts a scene from a Roman legend in which it was said about a dispute between two rival cities – Rome and Alba Long. Three brothers who are ready to fight for their city give a holy oath – an oath to their father, who blesses them to fight.

The painting is depicted in the neoclassical art style. Various artistic methods were used in its writing. The overlap of rows of profiled figures is a common method in classical art, applied in this picture. Attention is focused on the crossed arms, depicted by the artist in straight lines, which gives the classic clarity to the work of David. The clear organization of the picture, it is inherent in the strict symbolism of the number three, which again is another black artistic classicism. Brush strokes are almost invisible, all details are shown as clearly as possible. This way of drawing is characteristic of the rococo style.

The technique of the painter is aimed at the central figures; there are no hints at the veiled meaning of otherworldly objects. Men are depicted in the picture as warriors – clear, hard lines. This clarity underlines their courage and determination. While women are minor characters, only complementing the overall composition. Women are arched like arches, this underlines their despair and experience. In this picture, the feeling of patriotism of young people, the faith of the father in their sons, female loyalty and devotion are conveyed. David’s work The Oath of the Horatians reflects the values of the Enlightenment and is an example of neoclassicism.