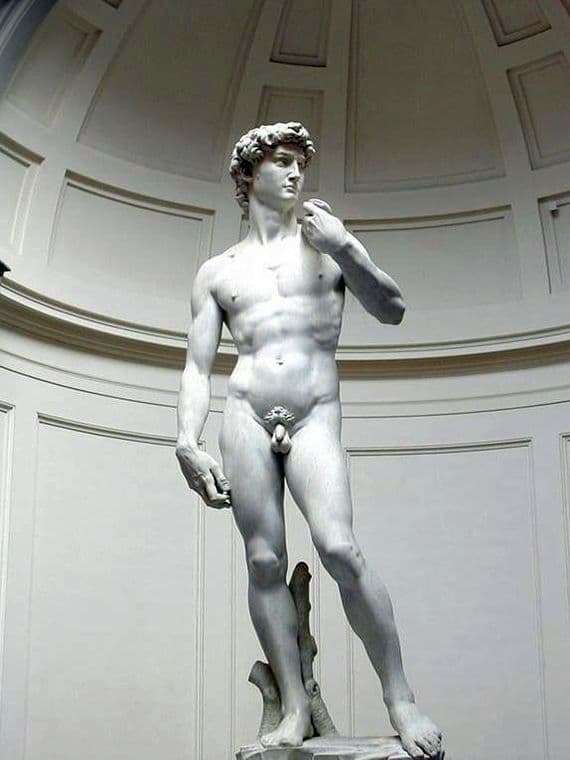 “David” is a marble sculpture by Michelangelo. This marble statue, whose height is over five meters, is the top of the Renaissance sculpture. The original of this statue is currently in Florence, at the Academy of Fine Arts. By the way, she is there to prevent damage. The statue is a naked figure of David. He focuses on the fight he has to complete with Goliath. David is preparing for battle. And the enemy is far superior in strength.

However, the young man is calm; it seems nothing betrays his anxiety. It is noticeable just how his muscles tightened, how his eyebrows moved. There is something frightening in this look. It can be seen as he slung his sling over his shoulder. Such a posture prepares a decisive blow to a formidable opponent. It can be seen how David personifies the power and omnipotence of a free man.

David symbolizes man’s confidence that he can defeat any enemy. The hero of the sculpture maximum attention. Thus, in front of the city government building in Florence there was a statue calling for courage and protection. At the same time, the sculpture of David is distinguished by simplicity, clarity and expressiveness.

There is nothing contradictory in it. Every detail serves to express masculinity, freedom and maximum concentration before a fight with a formidable king. There are also many copies of this interesting statue in the world. The most famous of them are in Florence, in the courtyard, located in the Pushkin Museum, as well as in the Victoria and Albert Museum. It is interesting that a fig leaf was prepared for the visits of the British Queen to this statue. Noteworthy