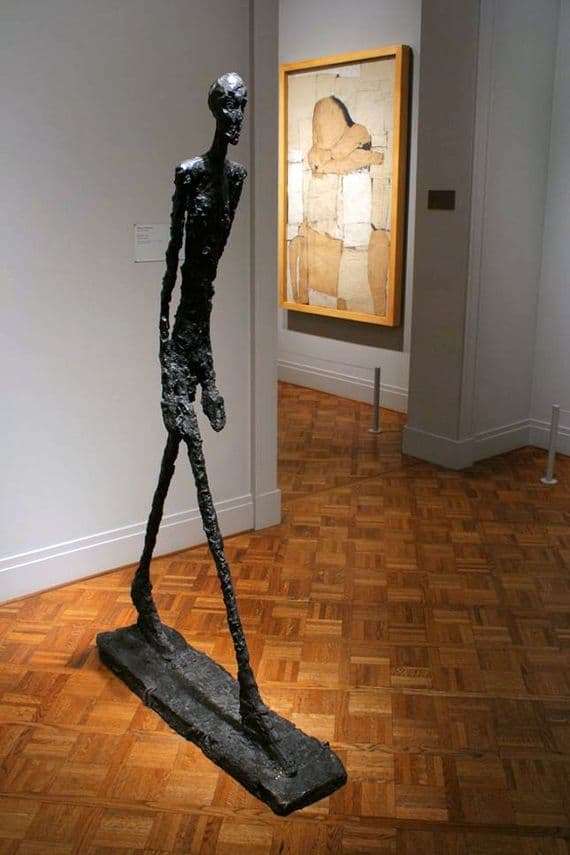 Walking man is a well-known sculpture, which has pierced with its deep meaning all the world art of the XX century. Authorship belongs to the genius master, graphics, artist Alberto Giacometti (1901-1966). A new look at the existence of an ordinary person, provided him fame not only in his native Switzerland, but also in other famous art capitals.

This sculpture was created in 1961 and became the impetus for the creation of subsequent works of similar subjects. The height of the statue reaches 183 cm. Poured out of bronze, it depicts a lonely man, frozen in half-step with his hands open. Appearance is marked extremely minimal – it is a thin, fragile highly elongated figure. The image of the sculpture is symbolic: it is made in line with the canons of existentialism, it calls for a return to the problems of a simple, vulnerable person. A distinctive feature of the work is worth noting the huge feet of the figure, which stand out significantly against the background of a lean body.

Being a great humanist, Alberto Giacometti thus presents the whole essence of the “walking man”: despite the difficulties, the man is able to step on, overcoming them. Standing firmly on the ground, he is not afraid to persevere toward his goal. In addition, the author additionally focuses on the facial features of the figure – pointed in form, with a piercing gaze, it gives hope for the realization of all intentions.

For public viewing, the sculpture was presented for the first time in 1962 at the international art exhibition in Venice. It was accepted with great success and proved the unique skill of the author. This work was the pinnacle in the works of Alberto Giacometti, his experiments with the human form and symbols.

To date, the “walking man” has not lost its importance in contemporary art. The real struggle broke out around the sale of this sculptors in February 2010 at an auction in London. Lily Safra from Brazil, who acquired the statue for a staggering £ 65 million (more than $ 104 million), became the happy owner.