Home ⇒ 🎨Monuments ⇒ Description of the monument to “Munchhausen” in Khmelnitsky 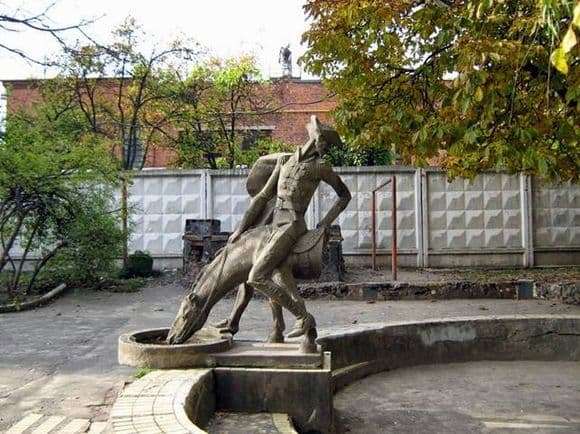 Baron Munchhausen is known in our country for almost everyone. This name has already become a nominal character. The baron was a historical person and one who became a character in various stories and novels in literature.

Therefore, it would be surprising that so much a bright and eccentric persona was not depicted as a sculpture. This did not happen, as there are many monuments to the Baron. But one of the first is the baron in the city of Khmelnitsky, in Ukraine.

The monument was created in 1970, when Ukraine was part of the USSR. Although at the moment the monument is no longer ours, but many residents remember it. And the plot itself is very interesting.

Sculpture, so it is better to call this cultural structure, is a very unusual look. The horse, on which Baron Munchhausen sits, has no back part of his body.

But this is no accident, because there is a story (one of many about this character) that once Munchausen tamed a horse, but in the battle he was cut off his backside. But at the same time the animal did not die, which surprised the Baron himself, who found the horse with the young mares in the meadow. Then the baron decided to sew the animal with threads of laurel.

Here is such a plot and found its display in park culture. Now an interesting and funny sculpture adorns the city, on it the horse has no half of the body, he drinks water that flows out from behind and this surprises the rider himself. That is, Baron Munchhausen. It is noteworthy that the capacity where the water is going is not just a reservoir, but part of the sculpture. In it, according to the organizers, the children were supposed to bathe in the summer.

They wanted to transfer the sculpture many times, but difficulties arose. One of the reasons of which was water, because the monument needs water supply. At the moment, the cultural object requires a serious restoration, the sculpture is destroyed.