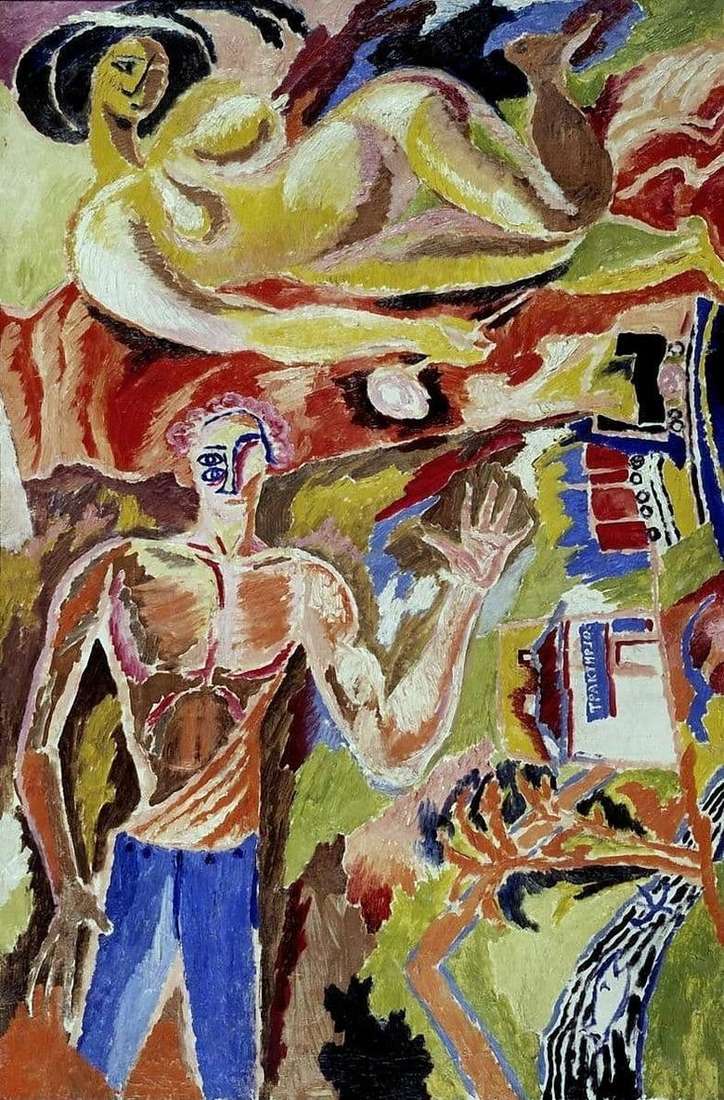 The painting titled “Portrait of the futurist Vasily Kamensky’s songwriter” was painted by Burliuk in 1916. She treats it as a work of art in the style of futurism with some echoes of primitivism and fauvism.

This picture does not carry the similarity of photographic accuracy with the real Vasily Kamensky. Burliuk portrayed him as a young man of a fairly well-built athletic build, with a bare torso. And he did not move away from his characteristic image of an exaggerated number of eyes. So the poet Kamensky, he portrayed two eyes on the right side of his face.

One name of the canvas already indicates that the image will stand out for its non-traditional style of writing. The picture does not so much depict Kamensky himself, as he tells about him.

Many researchers agree that this extremely physical, sensual, by no means incorporeal heroine is the poet’s muse. Kamensky’s love of flying was also probably reflected in the composition of the painting.

In the manner of writing the picture reflects Burliuk’s passion for the work of Marc Chagall. The naked woman depicted in the upper part of the canvas, flying right above Kamensky, reminds of the many flying women of Chagall.

Against the background of the picture there is a peculiar landscape across the right side of the canvas. It depicts two brown palm trees, a small house with the inscription “tavern” and a stretch of railway tracks along which the locomotive moves with one car. The rest of the background space of the painting is painted with divorces of brown, green and a whole palette of red colors.

To date, the picture of David Burliuk “Portrait of the futurist songwriter Vasily Kamensky” is in Russia in the State Tretyakov Gallery in Moscow.