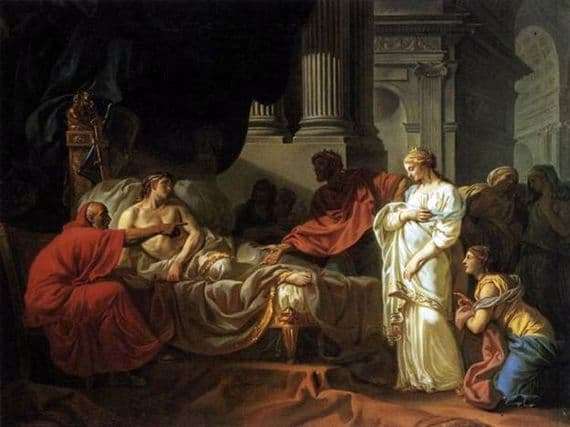 David is a French artist, a representative of neoclassicism – revolutionary classicism, which does not reject the old canons, but reinterprets them in its own way. Neoclassicists believed that the artist should not just be an observer and his main purpose is not to simply capture the surrounding reality. They believed that the artist’s mission was to develop self-consciousness and thinking among the people, instilling high moral qualities and aesthetic taste in them.

So the paintings became for neoclassicists a means of education, instead of a piece of art, while retaining many of the features of simple classicism, for example, the scale of the canvases and the historicity of the themes chosen.

“Antioch and Stratonica” was written according to one of the legends, which, perhaps, actually happened. Antiochus I, the son of King Philip, a Macedonian conqueror who lived about 300 BC, was once very sick. He struggled in a fever and gradually dried up, as if something drank life in him.

The doctors were powerless and could not save the son of the king, until the old doctor Erazistrat found the cause of the disease. It turned out to be a pernicious passion that exuded the young man – a passion for his stepmother, the beautiful Stratonica. Hearing that his son was dying because of love, Tsar Philip gave his young wife Antiochus, and he went on the mend and later became great.

The picture captures the moment when the old doctor suddenly understands the nature of Antioch’s disease. His whole posture speaks of sudden insight, an outstretched finger points to a modestly smiling Stratonica. The king is here, next, reaching for the doctor, as if not believing. Antiochus looks into space – his illness is already at a stage when the patient is unable to follow what is happening around.

The colors of the paintings are muted and brighten only in the image of Stratonica, as if emphasizing her beauty.