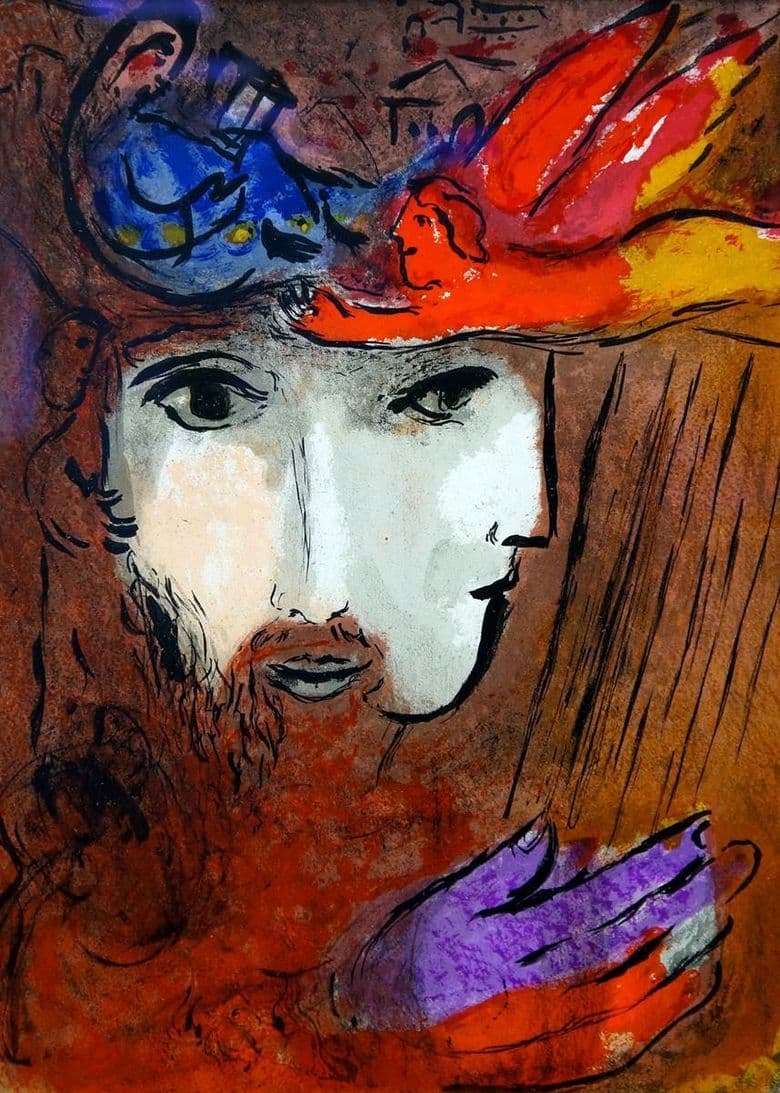 Marc (Movsha) Chagall was born in Vitebsk, into a Jewish family, received a traditional home education. The main element of his paintings has always been Jewish folk culture. Often the artist visualized proverbs in Yiddish, turned to biblical stories. The vocation of the creator for him was inextricably linked with national self-awareness.

In the thirties of the last century, the French publisher Vollard suggested to Chagall to make illustrations to the Bible. Before you start drawing, Mark goes to the land of his ancestors. It was there that he draws inspiration for 77 works illustrating the texts of the Old Testament. Bright and lyrical, original and penetrating, these pictures, in fact, are the quintessence of human feelings and a description of the nature of relationships.

“David and Bathsheba” – the most famous work of the biblical cycle. For Shagal, the plot of the Torah is an exciting love story of a man and a woman. King David once happened to see Bathsheba nude in a bathhouse – a girl of amazing beauty. Bathsheba was married, but her husband, Uriah, the commander of David, was at war at that moment. David sent Uriah to certain death, to the most terrible battle, and after his death he married the one he desired. Later, the king repented of his deed, but Solomon’s son was crowned king with him after Bathsheba, although Solomon was far from being the first offspring.

David – one of the favorite characters of Chagall, he devoted fifteen paintings. On the canvas “David and Bathsheba” the viewer sees two faces, masculine and feminine, merged together – as a symbol of the fusion of male and female principles. Later this motive arises already in the New Testament – in the Epistle to the Ephesians, the famous phrase about marriage: “and there will be two and one flesh.” However, on the canvas, Bathsheba turned away from the king – apparently, she was sad about her murdered husband. The hand at the bottom of the canvas holds the harp. Obviously, this is a direct indication that David played the harp, and even, according to legend, is the author of several psalms.