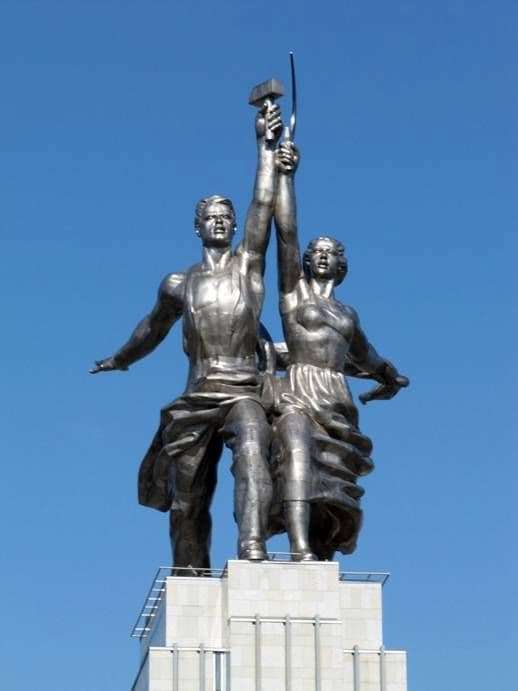 “Worker and Kolkhoz Woman” is the personification of the Soviet period of history, its ideals and social orientation. The monument consists of two figures – a girl and a young man, who hold the symbols of proletarian power over their heads – the hammer and sickle. The sculpture occupies an honorable place in the history of the monumental art of the country of the Soviets and “native” for residents of the former USSR.

The famous architect Boris Iofan, drawing inspiration from the outstanding sculptures of ancient Greece and Rome, developed the concept of creating such a monument, but with the “Soviet” charm. In 1936, a competition was organized for the best design of the statue. Among the works of talented sculptors, the sketch of Vera Mukhina was singled out, which embodied the idea of ​​a grandiose monument.

First, a reduced model of the monument with a height of 1.6 m was created from gypsum. During construction, this sample was planned to be increased 15 times. The construction of the monument took place at the plant of mechanical engineering and metalworking with the involvement of a huge number of workers. For the first time a new material was used for the monument – stainless steel.

Since the statue was bulky, wooden templates were designed for each detail, which were used as a framework for steel sheets. To connect the elements of the statue, an innovation of that time was tried – electric welding technology. 3.5 months were spent on the creation of the monument and the cumbersome work fully justified itself. Despite the difficulties of transporting a giant monument, in 1937 he was brought to Paris and adequately presented the monumental art of the Soviet Union.

When the sculpture was returned to his homeland for a long time it remained an open question about the placement of the statue. After reconstruction, the monument “Worker and Kolkhoz Woman” was installed on a pedestal of 11 meters and placed at the northern entrance of the All-Union Agricultural Exhibition – VDNKh. The image of the monument was so well designed that soon the Soviet film studio Mosfilm began to use it as an emblem.