Home ⇒ 🎨Monuments ⇒ Description of the statue of Buddha in Wuxi 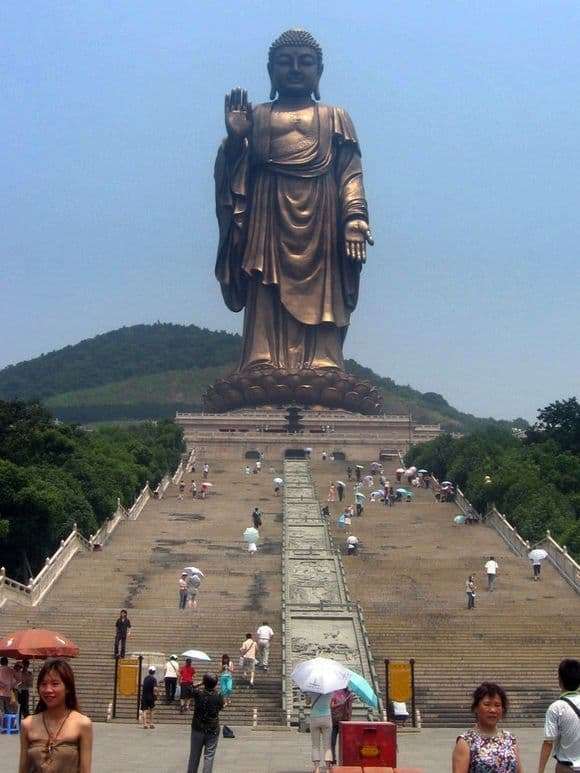 The statue of the majestic Buddha is installed in the city of Wuxi in China. It was made of bronze. It is located at the very top of Linshan Hill, near the tourism zone near Lake Taihu. Therefore, this place became a pilgrim among tourists from different countries. The Buddha of Wuxi is the largest bronze figure of the Buddha in the whole world.

The sculpture impresses with its size. She stands and rises above all, her head resting on the sky. Its height is eighty-eight meters, and weighs almost eight hundred tons. Sculptors worked on their creation for three long years. They started construction from the foundation, and the foundation stone was laid on April 20, 1994.

All citizens collected money for this building, and even donations were donated by people from other regions of China. In addition, there are underground floors with them, its length is 101.5 meters. The statue had to be erected in pieces. Blocks made of bronze were put on a pedestal and then welded together. If you measure the length of all the seams, you get thirty-five thousand meters. The work was colossal. Nobody refused to help.

The opening of the sculpture was held on November 15, 1997. It was attended by representatives from many countries: Singapore, Nepal, Hong Kong, Taiwan. Next to the majestic building is the temple of Xiangfu. To Buddha, located above all, lead 216 steps. If you go through them, then you can get rid of 108 sufferings. Pass two steps will be counted one suffering. At the foot of this figure you can always see a lot of people.

First, the pilgrims pray in the temple, and then they can ascend to the Giant. But before that, it is still necessary to worship the small figure of the Buddha. Its size is eleven times smaller than that of a standing statue on a hill. But the giant Buddha was made in the image and likeness of this reduced eight-meter figure.