Home ⇒ 🎨Rembrandt ⇒ Description of the painting by Rembrandt “David and Jonathan” 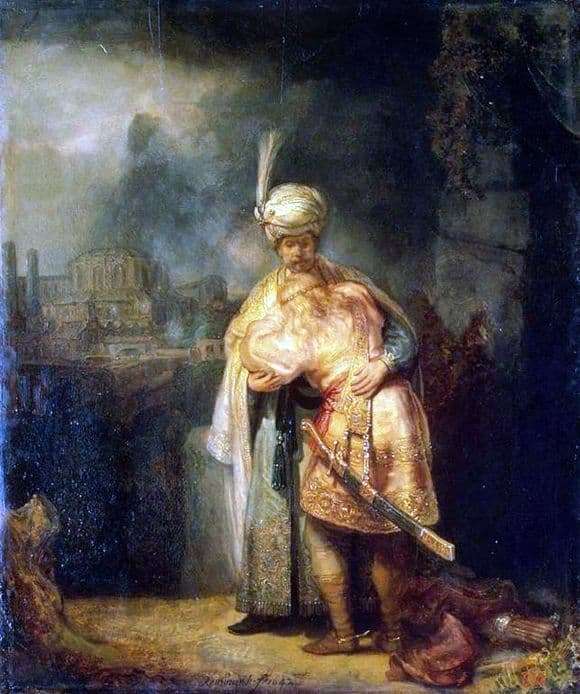 Dutch by birth, Rembrandt, undoubtedly, is one of the greatest artists of all times and peoples who have made an invaluable contribution to world painting.

Of course, first of all, the talent of the artist played its role in this, in many respects, this was facilitated by the fact that before writing each of his paintings, Rembrandt thoroughly studied the topic, weighed all the arguments and theories, thought about what to put in some place. The same happened in this wonderful picture.

Of course, as an artist, the Dutchman made some of his own additions to the main story, but the story itself did not change. He could also make a picture in a picture, a plot in a plot, but even in this case the author of the masterpieces did not depart from the truth obtained by him in the course of research. In our case, this is a story from the Bible, or rather, from the Old Testament.

King Saul, once friends with David, suddenly thought that the latter wanted to kill him and take the throne. Therefore, I decided to kill him myself. Jonathan was the son of Saul and, having learned about the plan of his father, hurried to warn David, with whom he was the friend of the most sincere, close, trustful and faithful friendship.

David is forced to flee from the king and flee. And so, the picture shows a heavy farewell of two best friends (what is happening, by the way, with a stone, whose name translates from Hebrew as separation). Jonathan is very saddened, it shows in his face, but he tries to hold on. David is crying inconsolably on his friend’s chest, unable to restrain his bitter feelings from a difficult parting.

Starting from about this period (and during this period his beloved spouse and model for pictures and drawings died) and further, Rembrandt will convey more and more heartfelt feelings of people, emotional experiences, joy and pain through the image and achieve unsurpassed professionalism in this matter.