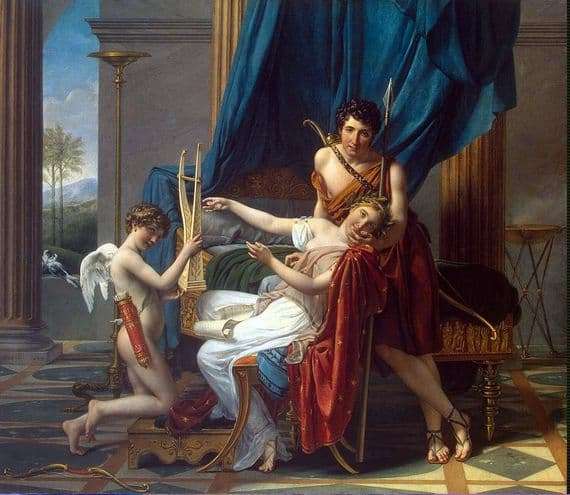 The work of the talented French artist Jacques Louis David is done with oil on a sufficiently large canvas. David is considered the founder of neoclassicism, based on the works of the ancient heritage.

The work “Sappho and Phaon” was made in terms of the artist’s late work. It bears the beloved Sappho and Phaon, as well as the small Cupid, transmitting the lyre to the woman.

In the image of a musical instrument and a little angel, the artist demonstrates love as the basis of creative inspiration. Based on ancient Greek stories, Sappho was one very famous poetess who worked in the genre of melodious lyricism. She was born in the lesbian city of Eres around the end of the 7th century.

Her works did not mention the name of Phaon – a fisherman, endowed with a goddess of infinite youth and captivating beauty. The legend, which says that the Sofa from unrequited love for the young guy Phaon fell from the cliff into the sea, appeared after the life of the poetess.

As a plot for his work, the artist chooses the moment where Sappho lays an ode about his love for the beautiful Phaon, and the beloved poetess, who appeared at the same moment, gently touches her face with her hand. The poet stops playing the lyre, and passes it into the hands of Cupid. At this moment, the creative inspiration that swept over her is replaced by the pleasure of the love and intimacy of her beloved.

It is not known whether Sappho’s love for the young boatman was real or fictional. There is no historical evidence of this event, but it inspired the artist to create this beautiful picture.

It merges the detailing of elements of ancient clothing and images with classical and traditional symbols of love, relationships and tender feelings. The author emphasizes the sympathy between two trees in love and a couple of white birds on the window.