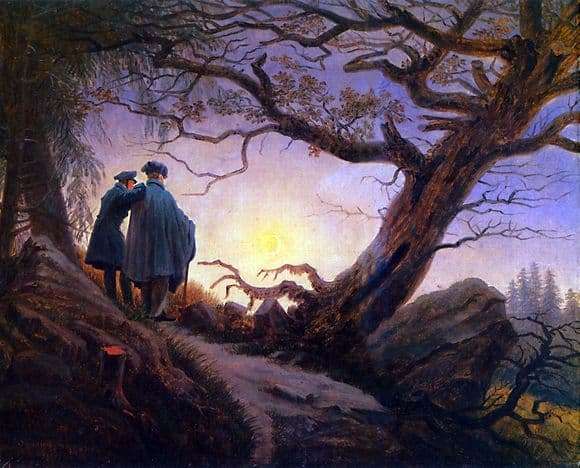 Many artists underlined the work of a person from darkness to enlightenment. Naturally, this was expressed on the canvas a little differently than required by the meaning.

One of these paintings is the creation of Friedrich Caspar “Two, contemplating the moon.” The work emphasizes, if not aspiration, then interest in something unknown, bright, but definitely necessary.

We see two, whose image appears to us almost as a silhouette. However, with careful consideration, we can understand something about these two people. At first it can be assumed that these are two travelers who stopped to admire the night sky. But if we note that both are dressed in accordance with the fashion of the time, it becomes clear that these are local residents who are tired of the city and have gone for a long walk.

Given that one put his hand on the shoulder of his companion, it is possible to determine their warm relationship. And looking at the gray hair making its way from the cap of one of them, then there is a bold assumption that these two are father and son, or an older brother with a younger one. The seniority of one of them emphasizes the position of the body in which it is located. Slightly stooped, he seemed tired from climbing a hill.

The artist took a special role in the setting around them. Judging by the elevations and boulders lying everywhere, it follows that these two are on a rock. Next to the people on the right, an old tree sags, whose roots are already half out of the ground. To their left is a serene fir. And even further – coniferous forest.

If you look closely, you can see how a half-stubbed stump sticks out among the rocks – a fruit of human activity. This confirms the conjecture that a settlement is located nearby. A little to the right of the moon you can see the star.