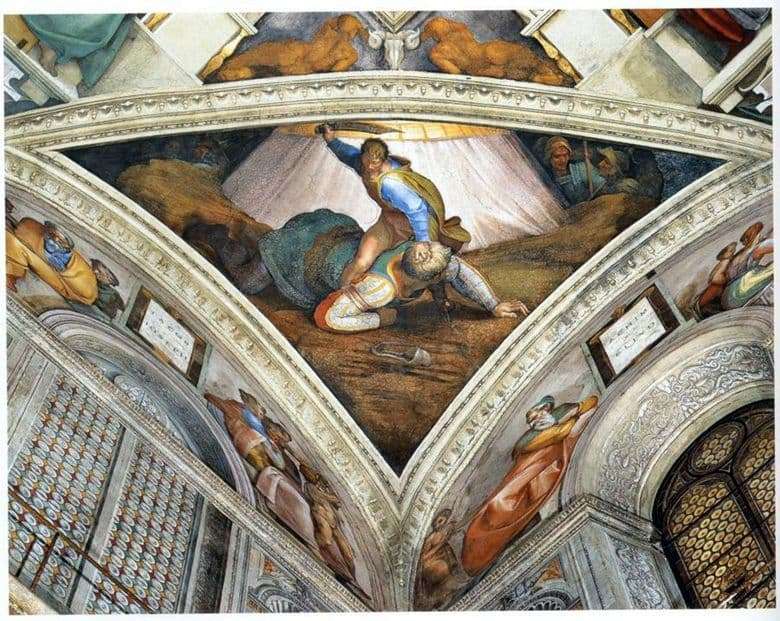 Entering the Sistine Chapel, looking up and to the left, the viewer will see part of the detail of the fresco “David and Goliath”. The main character was a famous person in the history of the Jews, a famous person in art. Lived in 10 Art. BC, served as offering arms to the king Saul. A little time later – ruled Judah. After defeating Goliath, who was much bigger than David (Goliath was a giant), he became a kind of prototype of Jesus, who managed to defeat the devil.

Next to the fresco, the viewer can see two bronze-colored naked figures of men. On the sides are two babies who are the prophets Joel and Zechariah.

Michelangelo Buonarroti worked on the Sistine Chapel for four long years. He began work at the age of Christ, 33, which was very symbolic. In order to make a masterpiece, which is admired to this day, the painter needed to master a new technique. In order for the ceiling of the Sistine Chapel not to “crush” on top of those who went inside, Michelangelo had to divide it into 47 miniatures, which he placed in a small frame made of tavertin.

In the famous chapel, the author created only nine scenes that were described in the Bible. Thematically they are divided into several plot lines, each of which has three murals. The first line is based on the universe, the second describes the creation of man and exile, in the third we will see the scene of the sacrifice, drunk Noah and the Flood.

“David and Goliath” personifies the confrontation of the king with the giant, his victory over him.