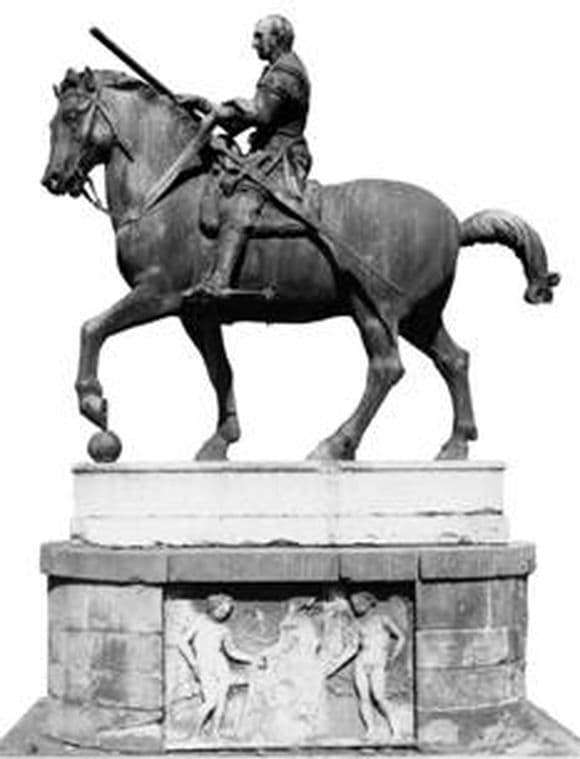 For ten years Italian sculptor Donatello worked on the prototype of all subsequent equestrian statues of Europe. By 1453, a master built a magnificent monument to condottier Gattamelate: a composition more than three meters long stands on an eight-meter pedestal.

Venetian mercenary commander deserved popular fame thanks to such qualities as courage and deceit. His figure sits on a horse majestically and nobly, with the determination and steadfastness inherent in military leaders.

He holds the horse’s reins with his left hand, and the baton in his right. The hero’s vestments correspond to the image of the Roman soldiers. Like the famous Caesar, he is no less courageous, and therefore immortalized by the brilliant Donatello in the square at the Cathedral of St. Anthony.

After seeing the commander’s outfit and enjoying the first impressions of the contemplation of a bulky monument, you can see many of the spiritual traits of this person. His face is calm and resolute. The position of the body demonstrates the restrained internal energy of the character.

With a confident hand he holds the rod of the marshal. All this in its entirety draws an image of the triumphant dignity. Regarding the lines of the body, the monument of a man is clearly of Roman origin: the lips are clearly outlined, the nose is crooked, the chin is small. This is a courageous and confident man in his proud position of the Italian Renaissance.

In Donatello’s equestrian sculptural work, the features of monumental art are guessed, such as solemnity and enlargement. The personal creative style of the master is seen in the skillful and detailed elaboration of the fragments.

Against the background of the city buildings of Padua, the statue of Gattamelati stands proudly and triumphantly. A hero from the past is an ideal of strength and readiness to fight, which is why he was perpetuated as a token of gratitude and as a cautionary reminder to descendants.