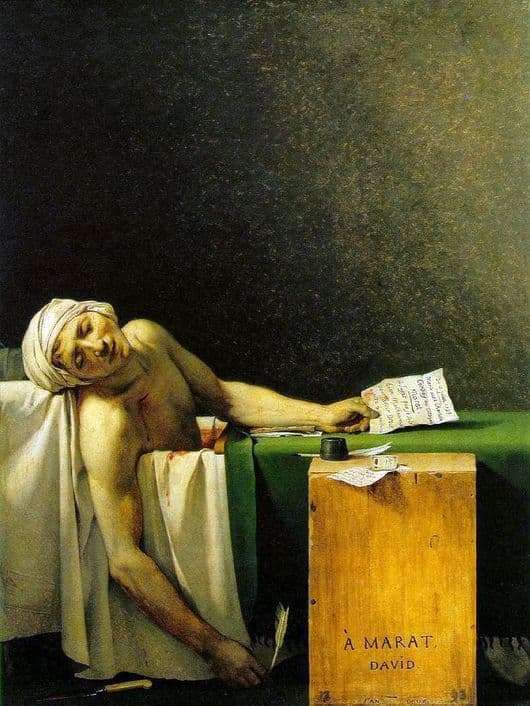 One of the masterpieces of world painting today is the painting The Death of Marat (1793), painted by the famous French painter Jacques Louis David. Marat was a very good friend of the artist and one of the toughest and fanatical leaders of the bloody revolutionary events in France. He was killed by the decisive blow of a knife in his bathroom. Therefore, this “portrait” of Marat, brilliantly written by the author, is a kind of reminder of the tragic events of those times.

It is on this canvas that the heroic realism of the artist achieves the best artistic embodiment. After all, the work was written under the direct impression of real events (David, in this form, saw a friend for the last time).

The masterpiece is a combination of historical truth with the emotional power of perception of the artistic image. At the same time, David in the picture is limited only to the most important details for revealing the tragedy of the image: a wilted lifeless body, a bloody wound, a knife and a letter (the killer used them to penetrate the room). According to historical information, the sick Marat was killed in the bathroom. And he took it at the same time when he read the insidious letter to Charlotte Corday (murderer).

Distorted by suffering and sorrow, the features of the hero have a pronounced portrait character. Bright light and clear cut-off on a dark background emphasize the state of detachment. In the role of the ancient sarcophagus, the spectator perceives a bath with drapery fabric. A block of wood, where the inkwell is set, stands a symbolic tombstone with an epitaph: “David to Marat.”

The author has monumental this image; through laconism and heroism, its dramatic expressiveness is emphasized. The artist created a masterpiece, similar to the majestically strict monument. Thus, he wanted to perpetuate the memory of his friend as a hero of France, and perpetuated himself as a brilliant French painter.