Home ⇒ 📌Posters ⇒ Description of the Soviet poster “Do not chat!” 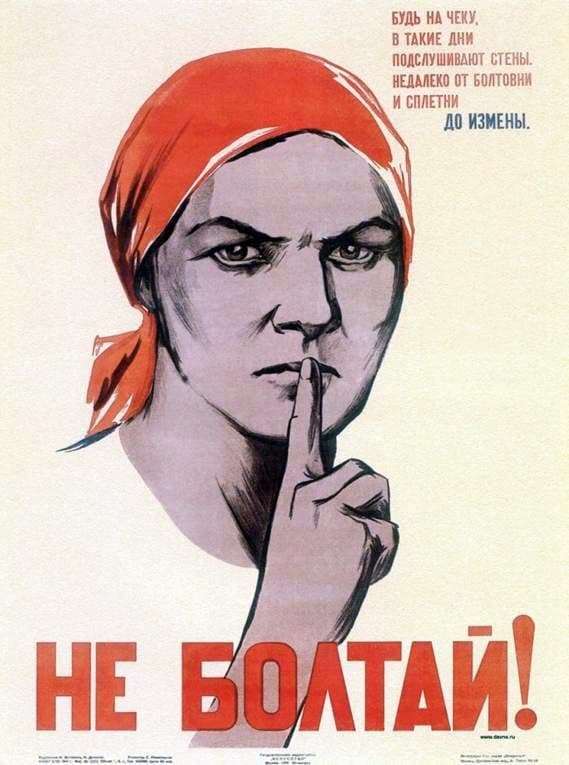 The Great Patriotic War was not only at the front, but also in the rear. Millions of Soviet citizens worked tirelessly for the benefit of the Red Army, providing it with ammunition, ammunition, necessary equipment and provisions. Medical units took seriously wounded soldiers, trying as quickly as possible to put them in order.

Many industrial enterprises throughout the country worked at full capacity with only one purpose – to provide the entire population of a warring country with food, heat and electricity. However, even in the rear, German troops tried to interfere with the operation of a single military mechanism, which during the Great Patriotic War was the entire Soviet Union.

German conspiratorial sabotage detachments operated throughout the country. Their tasks included many goals. They were engaged in disrupting the functioning of food supply lines, destroying important objects of the state’s industrial infrastructure, destroying sown and productive areas, eliminating prominent political figures and specialists in various industries and agriculture.

The harm inflicted by the activities of such groupings had a very significant effect on the military potential of the Soviet Union, thereby reducing the defense capability of the entire young state. It became clear that spies could hide under the guise of even well-known people. In order to convey to people the idea that it is necessary to talk less publicly about any things of national importance, an appropriate propaganda campaign was conducted. Her crown was the poster “Do not talk!”, Created in 1941 by artists Nina Vatolina and Nikolai Denisov.

The image of a woman who is not going to give her secrets to a potential enemy proved to be very successful: the poster was used after the war, during the ideological confrontation with Western countries.