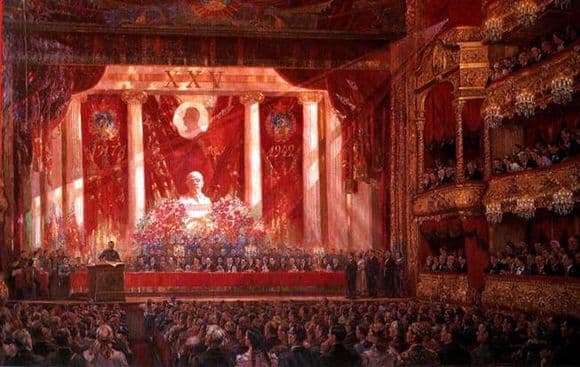 The author of the thematic paintings had the gift of a portrait painter, although he often turned to the topic of landscape and lyrical painting. Among his portraits are dominated by the faces of high-ranking leaders of the country and the party.

Large canvases resemble posters and serve as a model of the Soviet style. The color and manner of execution is characterized by a wide juicy brushstroke and an energetic, rough combination of colors.

The favorite artist of the leader Gerasimov was the first USSR president of the Academy of Arts, a hard leader who ruled the artistic life in the Soviet state. He was the spokesman of ideological attitudes and actively implemented them.

Historical background and personal characteristics left an imprint on his work. In his work of the 40s, epic scenes and group portraits of the Stalin era are expressed.

The masterpiece of the best Soviet artist’s brush appeared in wartime in 1942. The film feels sincere faith in the state and the Soviet system. A large canvas depicts a solemn meeting on the occasion of the anniversary of the October Revolution, but in fact it turned out that the meeting was not held, so the artist embodies the triumph on the canvas.

The meeting hall was chosen Bolshoi Theater, as indicated by the side lodges, a large stage with classic columns and a raised curtain curtain.

The work is part of the country’s historical heritage and is made in the style of social realism. For the monumental work was awarded the Stalin Prize. The pathetic picture visited 10 international exhibitions and is one of the most popular sources of the history of the state and of painting in general.