Home ⇒ 🎨Posters ⇒ Description of the Soviet poster “Have you volunteered?” 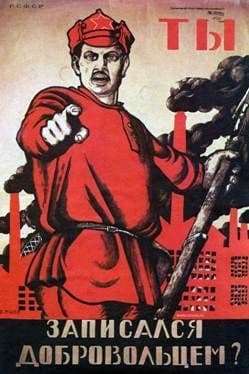 One of the first and most famous examples of Soviet poster art in Soviet Russia was the poster under the eloquent title “Did you enroll as volunteers?”. It was created in 1920 by one of the founders of poster painting in the Soviet lands, Dmitry Orlov, who created and worked under the pseudonym Dmitry Moor.

The prehistory of creating a poster sends us in the early years of the Soviet state. The year was 1920. In the country devastation, in some territories there is an anomalous drought, which caused a terrible famine. The new Soviet government is still recognized by anyone among other countries around the world. Former allies in the First World War in the face of the countries participating in the Entente (and these were France and the United Kingdom) carry out an intervention on the territory of the former Russian Empire with the aim of overthrowing the Bolsheviks who came to power and restore their monarchical structure.

However, the young state was the enemy and more serious. They were the remnants of the troops of the Russian imperial army, headed by such prominent figures of the White Guard movement as Denikin and Kolchak. Created to combat these forces, the Workers ‘and Peasants’ Red Army was experiencing an acute shortage of personnel, both among the rank and file and among the high command. In this regard, it was decided to conduct a campaign, the purpose of which was to attract more servicemen to the ranks of the Red Army.

For more visual help in campaigning, a poster was created “Did you sign up to volunteer?”. When writing it, Dmitry Moore was inspired by the most famous transatlantic poster of the First World War – the American “Uncle Sam needs you”. It is often circulating assumptions that the artist painted himself as an image for a Red Army man depicted on a poster. The poster was used during World War II to recruit volunteers in the fight against the German occupiers.