Home ⇒ 🎨Monuments ⇒ Description of the monument to Laika 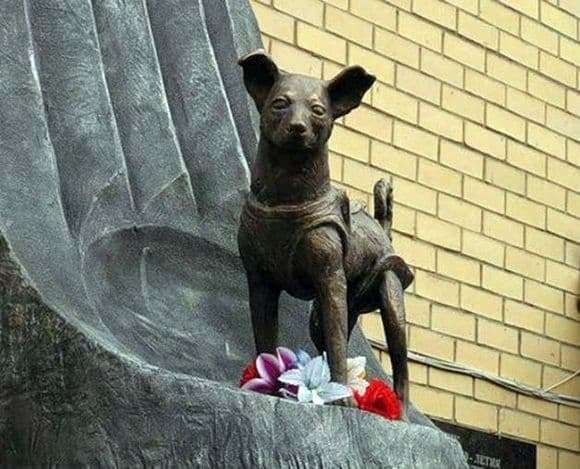 Everyone knows that the first visitors to space were animals, not humans. But the mongrel Lika was the first to be launched into orbit. She made four turns above the ground until she died.

The third of November fifty-seventh year was marked by the fact that the Country of the Soviets launched the orbital spacecraft Sputnik-2. On board was the usual yard dog of the bright color, nicknamed Laika. She did not come back from space, as it was thought out beforehand.

The dog was supposed to spend a week in orbit, but died a few hours later. The reasons were overheating. Because the satellite has shifted slightly from its orbit. And his movements became oval. What raised the temperature inside the unit.

With this research, scientists have shown that living organisms can be in space weightlessness. They will be able to survive finding a long time into oblivion. Since there were still flights Belka and Strelka, who returned to their home planet healthy and unharmed.

In the USSR, they were proud of the feat that Laika made. And the current generation has decided to pay tribute for their contribution to the development of astronautics. Therefore, in two thousand and eight years in the capital, Laika sculpture was installed. The author of the creation is Sergey Pakhomov, and the architect Pavel Medvedev helped him.

The entire pedestal has a length of 3 meters 85 centimeters, and weighs almost two tons. The base and the rocket are made of cast iron, and the mongrel figurine is cast from bronze.

The opening of the monument took place on April 11, 2008 on the eve of the day of cosmonautics. It was installed near the Institute of Military Medicine. The sculpture consists of a two-meter rocket, smoothly turning into a hand. There is a dog on it. She is depicted proudly standing, showing everyone that she has managed to make space experience. And all Muscovites are proud of this monument, showing the guests of the first Soviet cosmonaut.