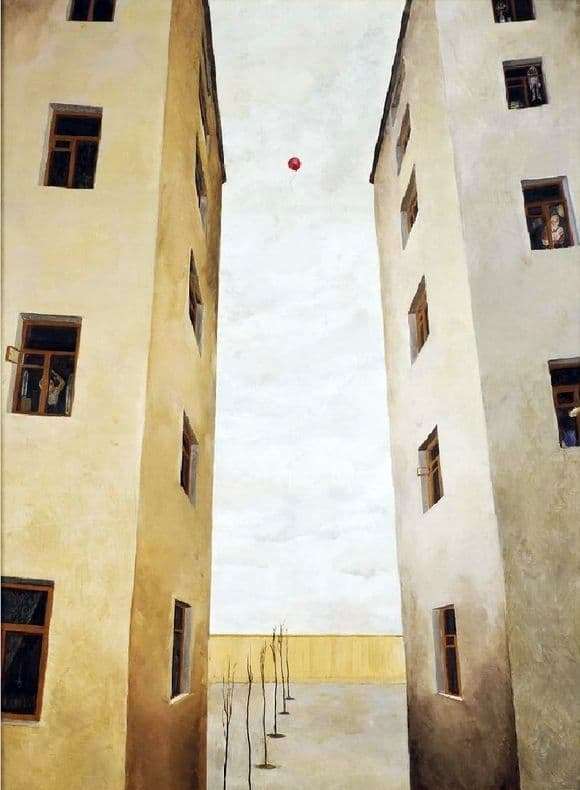 The artist depicted not the usual Soviet reality, but a completely different image, which reflects a completely different reality. Multi-storey houses, depicted on canvas, as if squeezing the space and hanging over it, creating a feeling of hopelessness. The gray sky symbolizes cold and indifference, leaving no hope for a bright future. The picture also depicts a little girl in a blue dress, standing in the yard all alone. Behind her are young, newly planted trees, and on top are crushing the walls of gray, huge houses. Trees symbolize a certain sadness and despondency.

She looks at the red ball flying away, rising high into the sky. Despite its small size, the ball stands out very clearly against the general background. Behind the girl is a wooden fence, as if protecting her from the outside world. On canvas, you can see the inhabitants, engaged in the usual things and detached rises in the windows of apartment buildings. In one of the windows is a mother with a child in her arms, and on the floor above you can see a man who committed suicide. In another window you can see a young woman combing her hair.

The artist is trying to talk about real everyday life, not embellished propaganda of the Soviet happy life. There are no hints of a bright future and a joyful expectation of a new day. Reality turns out to be not as rosy as many Soviet artists try to present it, but on the contrary, it is the embodiment of sadness and despair. The silhouette of a man hanging in the window is a hint of tragedy. Having considered the background, you can understand the depth of the picture, filled with a certain storyline. It creates a sense of submission and the pursuit of a common idea. One feels strong involvement in the imposed and alien principles and preferences.