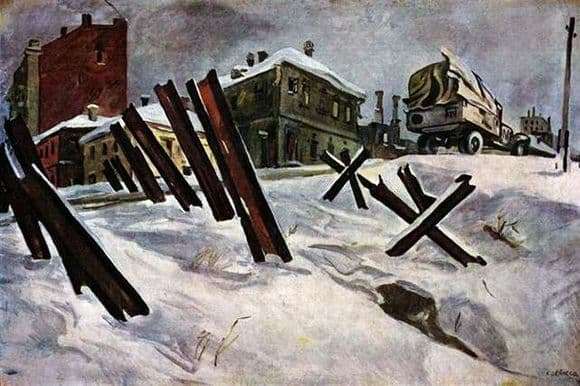 Military themes are often used by artists. More often depict scenes from battles and battles. A painting by A. Deinek “The outskirts of Moscow” reflects a household story of 1941, when German troops were stationed near Moscow, and the fate of the city could have been completely different.

Such a picture may not be noticed by an ordinary Moscow resident of that time, but, looking at this work, no one can remain indifferent. The foreground shows the anti-tank structures that surrounded the entire city. Several multi-storey houses are without windows, which speaks of fights in the suburbs area.

A passing truck creates a feeling of hectic time, but still giving hope for the best. The landscape is very calm, the ground is covered with snow, only iron fences and broken glass serve as a disturbing beacon. All work does not express a dangerous threat, but creates an atmosphere of intimidating danger, despite the absence of active hostilities.

The painter managed very precisely, with the help of ordinary things, to realistically convey the situation of the threat of that time. The arrangement of elements in the picture is not accidental, it is they who create the plot and atmosphere of the work. Thus, the artist expressed his pain and anxiety of wartime in ordinary things.

In the depiction of the outskirts of Moscow, the master conveyed the image of the whole country as a whole, its experience, the threat to security and dilapidated buildings. This is not just a house without windows, it’s broken hopes and a crippled soul, but the country still stands, albeit with broken windows, but it keeps and does not give up. The view of the city is depicted from below, so the artist elevated Moscow and made the image of the outskirts of the capital inaccessible and unconquered.

The master used gloomy and inconspicuous tones, such a color scheme gives the impression of danger. Deinek’s painting techniques do not amaze with their diversity, but they very accurately convey the mood of that time.