Home ⇒ 📌Posters ⇒ Description of the Soviet poster “I do not drink” 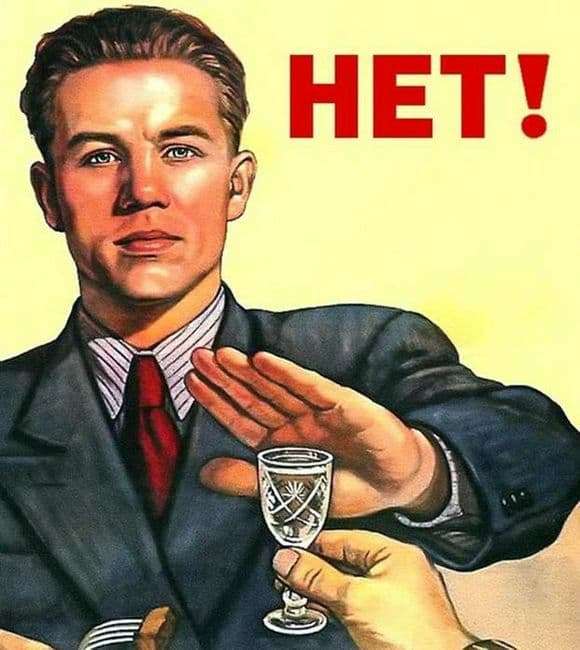 The topic of alcohol has always been sick for our country. Since since ancient times in Russia they loved to drink.

Drinking is a vice that is capable of destroying not only the life of the person who drinks it, but also causes irreparable harm to others. After all, if there is a drinker in the family, then this is woe to everyone. And it was no secret to anyone. Especially in this case, children suffer.

A man cannot independently fight against an insidious vice, as a rule, cannot. There are so many temptations around – there are advertisements, shops, and alcohol friends. A glass behind a glass and the person no longer notices how rapidly it rolls along the bad track.

Soviet times are long gone, but these were wonderful times. One of the outstanding memories of the time were various propaganda posters.

One of the options, which was a series of “I do not drink.” All of them were aimed at

causing shame in a drinking person. The authorities of various subjects urged people not to drink. Indeed, it would be so desirable that the opinion of foreign people was dispelled that in our country drunk walk the streets on an equal basis, like bears.

Poster “I do not drink” a vivid example of agitation. It depicts a serious, determined man who sharply refuses to offer vodka. His appearance proudly flaunted across the country so that the Russian peasant could focus on a decent person.

Also, the posters contained many variations on the theme of family and work. Most of them are men. But then there were, and there are grief-women who changed everything that they have for a bottle.

Yes, the times are long gone, but there are so few such agitations today. Today they are trying to revive the tradition that can be seen on rare posters in cities, with an appeal to drinking fathers or drivers.

Of course, such posters will not be able to completely solve the problem of alcohol, but perhaps driving past them at the moment, at least one person will think that they are waiting for him sober at home and have something to live for.