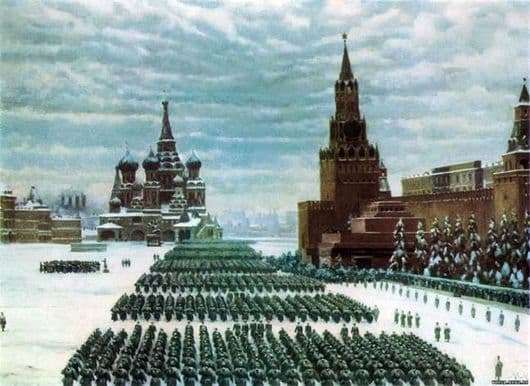 Konstantin Yuon is a famous Soviet artist who painted his painting Parade on Red Square in 1941. It was a terrible time for Russia. That November, the Germans were already on their way to Moscow, and it seemed to everyone that time was not suitable for holding a solemn military parade. But the traditions were not violated – the parade took place. Immediately after the parade, Yuon begins work on the painting. He seemed inspired by the fact that the country is not broken. He believed in victory and in the fact that the walls of the Kremlin are impregnable.

Looking at the picture, the viewer immediately sees the sky – low, gray and cloudy. It evokes anxiety, fear. Red Square is snow-covered and, which is unusual for this place, is deserted. Only the troops in even rows go through the square. The soldiers are confident in their strength and victory, they are striding clearly, chasing a step and knowing that from the parade they will immediately enter a real deadly battle.

Everything shown in the picture is strict, clear and calm. The country is ready for war and battle, no one is afraid of defeat. Yuon wants to show how solemn this moment is, how he talks about the strength of the Russian people.

Monuments of architecture, depicted clearly, complement the situation of celebration. The Kremlin, St. Vasily’s Cathedral has already seen a lot during its existence, they instruct the soldiers, instilling confidence in them.

In the background, the pictures show the working pipes of the factories, which means that Moscow is working without stopping in order to provide the soldiers with everything they need. The rear will not fail. The picture makes a heavy impression on the audience, it sinks deep into the soul due to its severity and masculinity of soldiers marching into battle.

The theme of war has always excited, and will excite the hearts of artists and ordinary people. Many masters still turn to this topic. But the canvas, created in the terrible years of the war, will always find a response in the soul of the viewer.