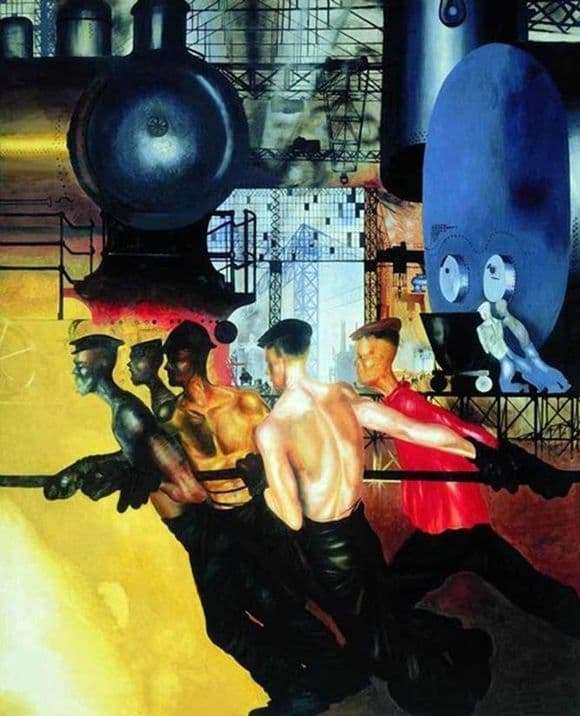 A picture is a slogan, a picture of a call, this pictorial canvas by Yuri Pimenov is assessed by someone as heaped up, and someone is talking about the ingenious structure of the composition. There is no doubt that the picture was painted by the artist Yuri Pimenov for the order of the Economic Council, and for the magnificent performance she received the prestigious Soviet Union award at the State Orders Exhibition. It is believed that it was from this exhibition that the “renovation” of Soviet art was launched. Based on the paintings by Pimenov, a propaganda poster was later created.

Simple steel mill workers are the focus on this canvas. Lined up in a row of five workers pull steel reinforcement, their actions are depicted in dynamics, the strong bodies of stately working figures glow not only from the scorching heat of the machines, but also from the great idea raised by the Soviet Union, for which they are working. The lighted figures of the two workers in the background, navil with all their bodies, push the cast-iron cart forward, along the scaffolding.

Critics rightly point out that Pimenov’s paintings are devoid of plastics, everything in them is two-dimensional, flat, but these “flaws” can already be considered corrected by the painting “Give us a heavy industry!”. Mentally, one can imagine the mechanized movements of the workers, but not to notice that the main “cog” in the huge machine of industrialization is, of course, a living person – blood and flesh.

Smeared in the ashes, their bodies stand out vividly against the background of a machine glow, while at the huge furnace they stand out in contrast with the artist. Each of the internal compositions of the picture can serve as independent canvases, but the combination of human labor and factory buildings, smoke, locomotives, accurately convey the atmosphere of an incredible pace of development, given by that era.