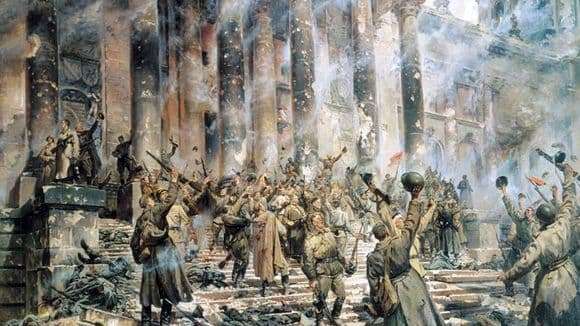 Peter Krivonogov – the famous graduate of the studio M. B. Grekov, who gave the world a lot of talented military artists.

Krivonogov had a chance to participate in the last large-scale war – the Great Patriotic War. He went all the way – from Moscow to the victorious Berlin. Having joined the army in 1939, the painter until 1945 bravely absorbed the bitterness and horror of the war period. He made quick sketches of battles, wrote portraits of his colleagues, in more calm periods at the front he created full-fledged paintings.

“Victory” is the most famous battle work of a Soviet artist. The plot was conceived at the very moment when the Red Army victoriously stormed the German Reichstag, and he fell in ruins, debris and dust.

Krivonogov set a goal to write this large-scale in size and number of characters picture after returning to his homeland. Work had about three years. In 1948, the

canvas was ready, it fell on the exhibition and a year later brought the author a well-deserved award.

What do we see on the canvas? The victory over fascism is accompanied by the artist with the joyful cries of Soviet soldiers – the repeated “Hurray!”. An uncountable number of men in military uniform solemnly and selflessly rejoices. The intoxicating sense of liberation from the Nazi invaders forces the fighters to raise their hands up, pulling up arms, helmets and scarlet flags.

The Reichstag building is crushed, the burnt columns are dotted with shots, stone fragments and killed opponents are on the steps. The battle had just ended, even the smoke had not disappeared at the scene of the skirmish. This is the first cry of joyful liberation, this happiness, granted for perseverance and loyalty to the ideals of justice.

“Victory” came in a wide circulation – it was printed in periodicals, in books and on postcards. The painting became a symbol of the unity of the people in the fight against the common enemy.