Home ⇒ 🎨Posters ⇒ Description of the Soviet poster “Everything for the front! All for victory! “ 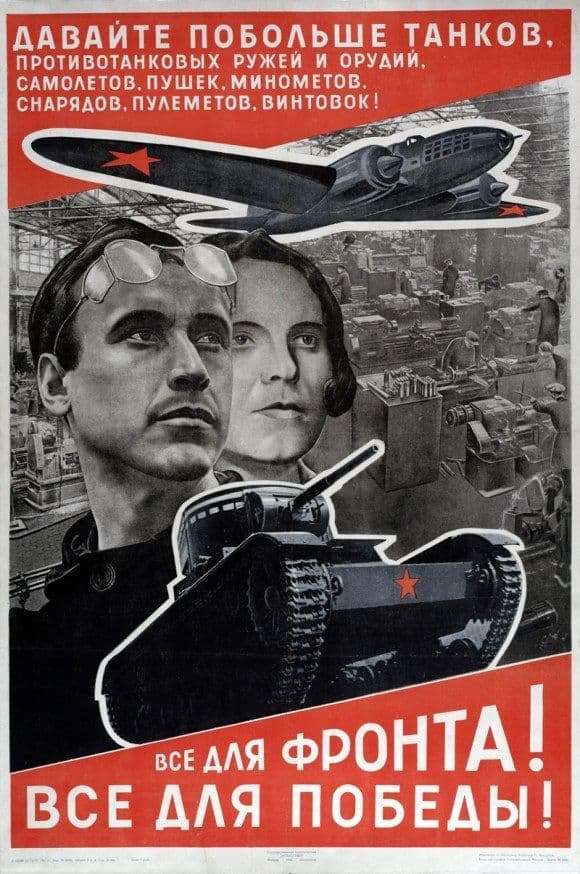 The Great Patriotic War is a whole epoch for our country. These hard years have shown how powerful our country is. The war rallied all the Russian people, no one remained indifferent around the world.

Despite all the litigation, harsh conditions, endless battles, hopeless days, we were able to withstand, to prove our strength and glory. Victory Day is celebrated on a large scale every year. This is the time when the whole country unites, marks and recalls those harsh times when our people neither gave the enemy their native lands.

In such a terrible time for the country it was very important to support the soldiers morally. Of course, all over the planet know the power of the Russian “Hurray!!!”. The Soviet authorities did everything they could.

Across the country, posters were posted that said that for the front we must give everything we have. They called for the industrial plants that made the most powerful tanks, aircraft, and ammunition to operate at full capacity. They shouted to help everyone. And reproached those who have not yet helped the soldiers on such a difficult path to victory.

One of the posters of the series “Everything for the front! Everything is for victory! “, Which was created in 1942 by Lisitsyn, shows us simple working Russian people who created great technique.

Behind their backs stands the city, as if to say that its future is behind such simple workers, it depends on their clear, correct actions and achievements at work. Everyone helped with what they could – both old and young. People were ready to give everything and give.

Factories sewed clothes, old men raised food in gardens, girls, boys, men and women went into battle. Our warriors have proven that we are the bravest and strongest nation. And now they know about it all over the world, and our status of a great power remains unshakable. Of course, all these actions led our country to the greatest victory in history.

Soviet posters are powerful moral support. People simply could not not correspond to what the country expected from them.