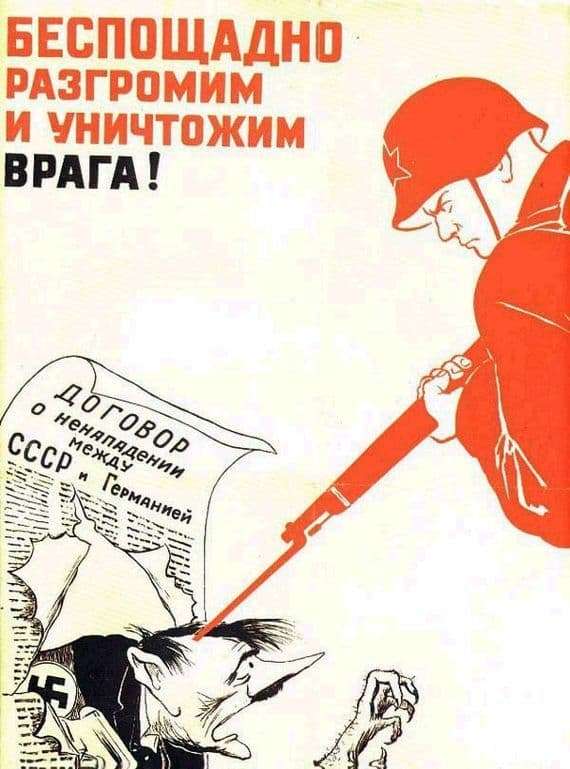 The Great Patriotic War greatly influenced the poster art on the territory of the Soviet Union. Naturally, the main theme then was the opposition to the enemy in the face of the hated Nazi Germany. However, it is very interesting to trace how the enemy was depicted on posters of that time.

Our generation, who grew up and was brought up more than half a century after the end of the Great Patriotic War, was accustomed to seeing the Nazi troops as evil, strong, insidious and despicable opponents. After the war, the images of the Germans were still imbued with hatred towards them, but there was a tendency to portray the enemy as a clever, calculating, and therefore very dangerous and difficult adversary.

It is easy to guess what was the reason for such an image of the Nazis. This was done in order to emphasize the merit of the Soviet people in the victory over the German occupiers. Only a really strong and worthy challenger, who was the Soviet Union, could defeat such a complex and powerful opponent. However, in times of war, Hitler Germany was portrayed differently.

The cunning of the enemy, his meanness and cowardice, pushed him to violate the Molotov-Ribbentropp non-aggression pact between the Soviet Union and the Third Reich, signed back in August 1939, were brought to the forefront. The Soviet people should have known that they were on the other side of the front line fights a very cunning and cowardly enemy who is not so invincible as he considers himself.

That is exactly what Germany was depicted on the poster “Ruthlessly crush and destroy the enemy!”. This masterpiece of Soviet poster art was created in 1941 by a group of poster artists “Kukryniksy” composed of M. Kupriyanov, P. Krylov and N. Sokolov. The poster depicts a Red Army soldier preparing to mortally hit the enemy – the Fuhrer of the Third Reich, Adolf Hitler. Hitler on the poster is depicted as a small, hunched little man, huddled before the blow of the Soviet soldier. The idea of ​​the poster was simple: the enemy is already afraid of us, and therefore victory is coming, moreover – victory is already near.