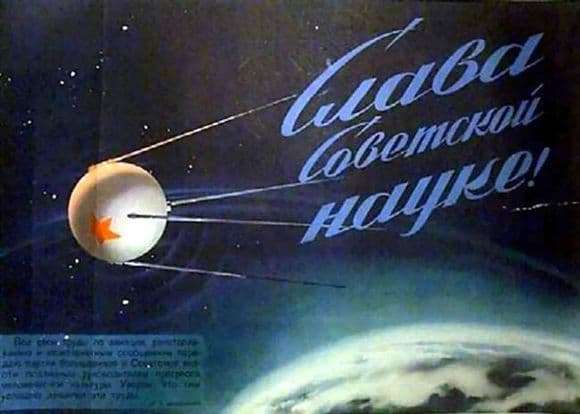 Soviet posters are part of the history of a great power. They carried propaganda slogans to the masses who called people to action, moral and physical development.

Posters produced on various subjects. Each plot was thoroughly thought out, and had a deep meaning.

Yes, times have changed, but even now, in different parts of our vast country, we can see long-faded slogans hanging on the walls of buildings. One of these very proud Soviet posters is “Glory to conscientious science.”

He did not leave anyone indifferent, he touches the strings of the soul even now. Created was the plot in 1957. Indeed, in this heavenly color figure, the first satellite is depicted. And he was exactly ours.

The satellite flew into space, opening the curtains of infinite mystery, and a new era of space technology. We are proud of our country and now, celebrating holidays dedicated to great events. More than half a century after the creation of the poster “Glory to Soviet Science,” we also remember the space achievements of our country.

The poster was a powerful propaganda of Soviet science, our power. The first satellite is decorated with a red star, as a bright symbol of that era. Also on the poster is the phrase of our famous scientist Tsiolkovsky. The great scientist worked for the development of the Soviet state. Therefore, his phrase proudly decorated the lower left corner of this memorable symbol of that era.

Every citizen of a great power could see such posters throughout the country. They reminded of a great event, leaving an eternal trace of pride in the soul of the people of that era. Indeed, it was something to be proud of.