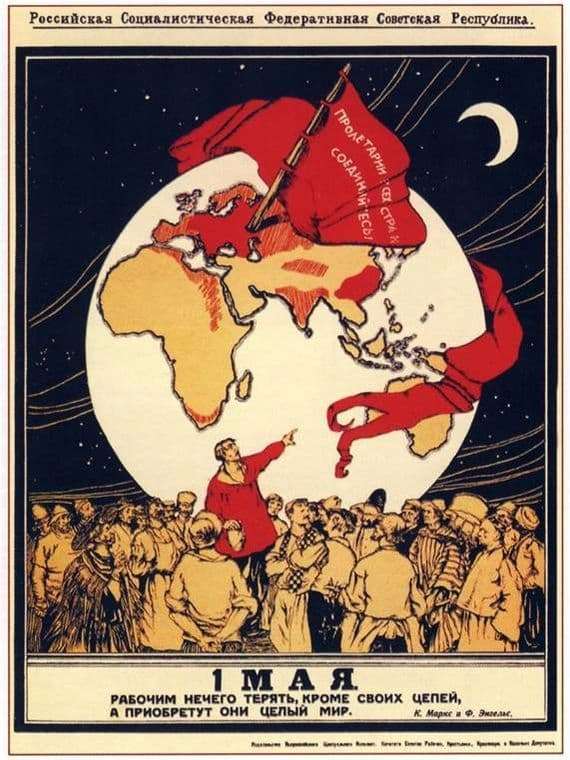 Soviet poster art of a social nature is a very diverse and multifaceted phenomenon. Over the years of its existence, the most important events in the history of the Soviet Union served as its background.

In the first years for the young state, the main struggle in most posters of that time was the class struggle. This topic was relevant for the revolutionary years, when it was the struggle between opposing classes led to the appearance on the world map of a new state, formed on the ruins of the former Russian Empire.

Posters of the period picked up the class idea and transferred it to the full. One of the founders of the Soviet poster art of those times was Alexander Apsit, a Latvian by birth, a graphic artist known since pre-revolutionary times. His development as a creator of works of art, he passed in St. Petersburg. There, being close to the revolutionary circles, he was imbued with the ideas of class struggle. After

the revolution, he turned his attention to posters. In his opinion, it is precisely this kind of visual art that helps to convey the ideas laid by the author as precisely and clearly as possible to the mass audience.

One of the most famous works of Alexander Apsit is the poster “1 May” drawn by him in 1919. His appearance was timed by the author to the International Day of Workers and Workers. Taking into account the views of Apsit about the class struggle, it is easy to guess the reason why he decided to create work for this holiday.

The composition of the poster consists of workers, behind whom is the globe. At the head of the labor movement is a man in a red shirt, clearly symbolizing the working class of the Soviet Union. He is actively telling other people, while actively pointing to the globe, which already shows the beginning of the revolutionary upsurge of workers, which began with the Soviet lands.

This poster is an excellent illustration of the ideas and views of that era. According to them, the world proletarian revolution is not far off, and it is the Soviet workers who will play the main role in it.