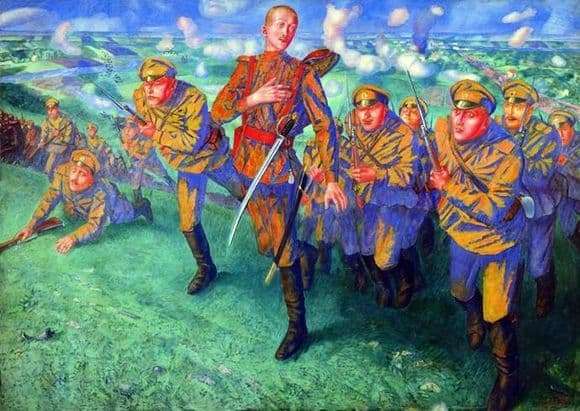 In wartime, the artist came to serve in the military department in Petrograd. Therefore, what is military action, what is the life of officers and soldiers, he knows firsthand. In the painting “In the Line of Fire”, Petrov-Vodkin uses a tricolor color gram. Namely blue, yellow and red. In these colors and conveyed the image of the Civil War.

Movement of the military smooth and slow. And the compositional principle chosen by the artist allows to see the characters from the side and from above. Petrov-Vodkin successfully conveyed the image of the Earth precisely as a planet. The military as if rises to some peak, but cannot rise. And in general, this image is very tragic. The second name of this canvas is the “First German War”. The soldiers of the Russian army are dying with eyes full of horror and despair. Their task is to save, protect the king and the fatherland. That’s just they can not do either one or the other. One gets the impression that they are now also slowly fall one by one dead on the ground. And everyone will have this panic and this horror in wide-open eyes.

The picture clearly expresses the tragic time when the country was literally falling apart before our eyes, but everyone firmly believed in a happy bright future. That’s just the author of the canvas did not believe. He depicted this impossibility of people to rise to something higher. And the blue, aerial dreams remain somewhere behind. The picture is a kind of symbol of the whole epoch, when people believed in “castles in the air” and selflessly went towards unrealizable dreams. Only at the end did they understand the senselessness of the situation.