Home ⇒ 🎨Posters ⇒ Description of the Soviet poster “If you will not read books, you will soon forget the letter” 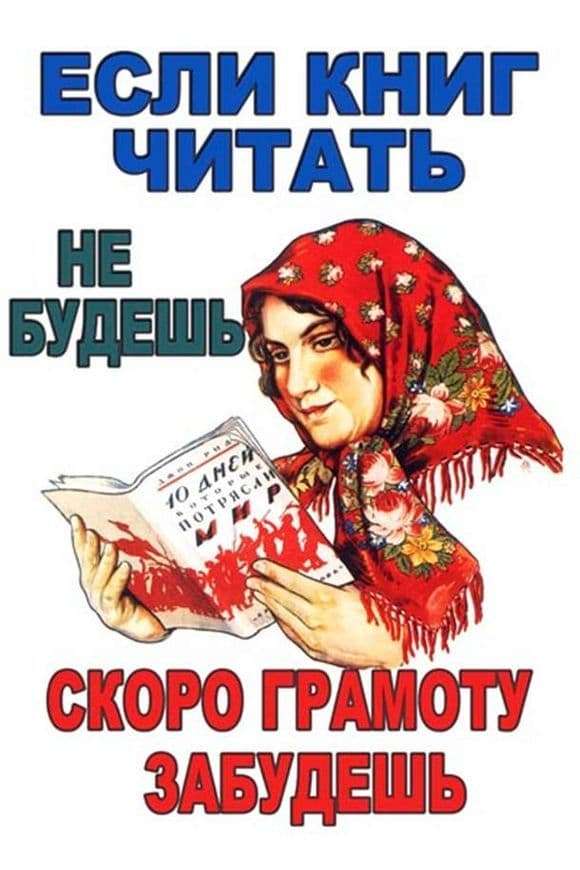 Campaign posters, which in our time would be more called motivational, were very popular in the last century. Each of them displayed its own meaning.

Posters were created in whole cycles, where some topic was taken as a basis, for example, illiteracy or drunkenness, and on this topic, the artists created a number of different plots, but with a general meaning.

At the beginning of the last century and beyond, the country began to combat the illiteracy of people. Therefore, it is not surprising that reading of books was one of the topics for creating a new cycle of posters.

Artists have created a lot of paintings on this topic. All of them called for people to study, to read, because books are a source of knowledge that can never be replaced by something else. They were thousands of years ago and will continue to live.

Education among the population has become very important in the past century, and over the century it has stepped forward a long distance. Posters played an important role in this, because some of them portrayed women, who had previously been considered more and more intended for the economy, and not for science. It was already unfashionable to be illiterate. Another very good one calling for the attention of parents was a poster from the same cycle “The more you scold and be guys, it is better to buy them books”.

The poster “If you will not read books, you will soon forget the letter” – this is a very powerful motivator that is relevant to this day. Indeed, in our age of modern technology and progress, people have begun to move more and more away from reading the usual paper books using electronic format and summary.

But such an approach deprives a person of a complete imagination, memory becomes worse. Attention and assiduity can not be brought up in a summary. In our time, the phrase from this poster is very relevant. And such posters would not interfere in our society.