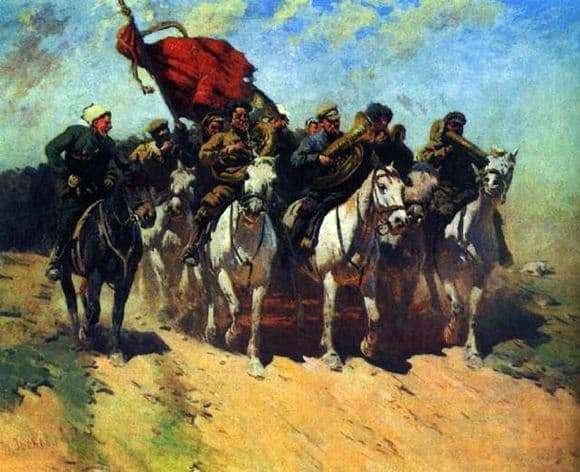 MB Grekov is the founder of Russian battle painting. According to his works, one can study the history of the Soviet state and visually see everyday events. One of the clearest examples of work in this area is the painting “Trumpeters of the First Cavalry Army”.

The artist was called up for military service and wrote all his works, based on personal experience. In the army, the painter did not stop work and displayed the difficult working life of ordinary Soviet soldiers and the work of trumpeters, who needed not only to ride a horse, but also to play music.

The idea of this work the artist hatched since the civil war. He became the original creator of visual aids for the exploits of the Red Army.

In the work of the painter very accurately managed to convey the movement and aspiration of the cavalry troops. Trumpeters are seated on the front flank, these are not sleek musicians, but major warriors playing wind instruments. In front of the whole cavalry they raise the morale of the soldiers, show their courage, courage and bravery.

Near Ataman in a sheep’s cap, he turned to the trumpeters, and perhaps something screaming. Maybe it’s a battle cry. The red banner of the scarlet wave develops over the heads of the soldiers. The cavalry, with its multiplicity, moves off into the distance and apparently not everyone can hear the game of the trumpeters.

The artist conveyed the importance of raising morale. Rising dust on the road means that the horses are not just walking slowly, but moving at an active pace. The picture is filled with patriotism, and I want to join the cavalry and join the fight for injustice. A clear day creates a positive mood.

The artist witnessed troubled events and was able to transfer the mood of that time with accuracy. The painter himself joined the detachments of the Red Army and accompanied them during the entire period of the civil war. He played the role of an army artist, capturing the events of that alarming time.