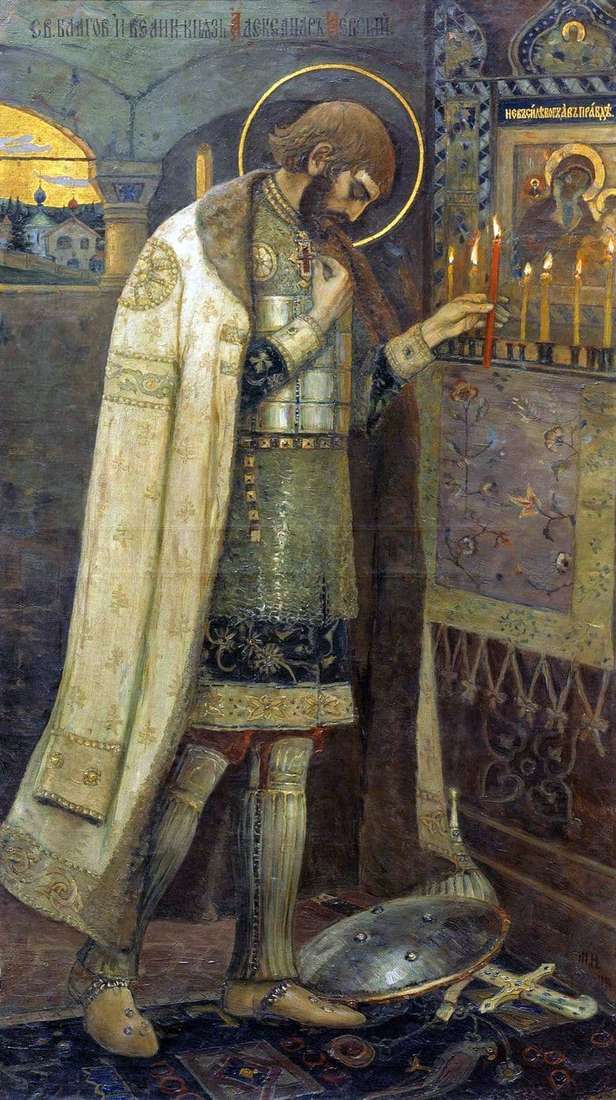 Mikhail Nesterov was born into a merchant family with strong religious roots. The boy’s father strongly encouraged the desire of his son to painting. At the beginning of Alexander’s career, his paintings did not have much success – critics blamed the young artist for their detachment and cold work. The death of his beloved wife Maria triggered the development of Nesterov’s talent. This terrible event and the incredible grief that fell on the artist, forced him to draw with unheard of heat. After the death of a loved one, the creator went even further into religion. The main and most famous of his works – paintings of cathedrals and temples.

The painting “Alexander Nevsky”, being an independent work, at the same time served as the basis for the subsequent creation of icon-painting mosaic. The coloring of the work is characteristic of Nesterov – dark, muted tones, rare bright bursts

– burning wax candles, a golden sunset in the window. This manner of writing allowed the artist to correctly place accents, to draw attention to the most significant details – the domes of the church, framed for which is a window frame; burning candles set in the glory of the Lord.

The hero of the picture bowed his head in front of the icon, in all its appearance – humility and tranquility. Alexander’s light attire testifies to the purity of his thoughts; scarlet boots are as if stained with the blood of defeated enemies. Above the head of the commander is a golden halo, which canonize him as the saints of the Russian Orthodox Church. Military attributes, symbols of glory – a sword, a helmet, a shield – are thrown to the feet, as if they had no great significance. The artist focused all his attention on religious symbols. The prince praying in the home church is completely dominated by thoughts of God, and at this moment he renounces his worldly glory. Alexander Nevsky makes the sign of the cross with his right hand.