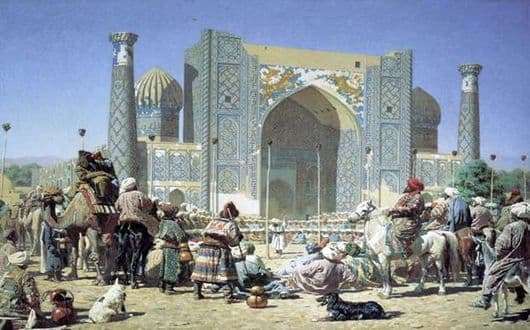 Middle Asia. Ancient Samarkand, Registan Square. Now it is a national treasure, but on the canvas it’s just a square where people have always flown to learn something new, or to celebrate an event. On the canvas of the Russian artist Vereshchagin is just a celebration associated with the victory over the enemy. It really doesn’t matter what it is, it’s important to show how it all happened.

You need to start with the most terrible element of the celebration. A line of poles passed through the entire square, with the heads of slain enemies sticking up at the top of each pole. It’s like the Indians had their scalp taken off, then they simply chopped off their heads either during the battle (the head was a trophy), or already from a prisoner (if no one was taken into slavery).

In the very center of the square a circle formed of the faithful and powerful of this world. If the places in the circle were already occupied, then they approached the circle on horses or donkeys and watched from this height on what was going on inside the circle. In the very same circle began the presentation. It could be acrobats, maskaraboz, fakirs or rope-walkers. Sometimes the wits came to the center, who in his own words delighted the ears of the listeners with a cheerful talk, or even a simple story about the military valor of their ancestors.

Vereshchagin conveyed exactly the atmosphere that was in those minutes on the square. Despite the heat, there were always a lot of people. But what is interesting is that the artist was able to meet the main condition of any Muslim. Faith forbids to draw people’s faces. And in order not to offend anyone, the artist did not draw on someone’s face on this canvas, he simply turned his back on the audience, as if unobtrusively inviting him to look into the circle.

Of course, the artist had sketches and sketches and canvases where faces were painted, but on this canvas specifically, the rule of the Quran was perfectly followed. Maybe it was so conceived, or maybe the painter really knew about the condition.