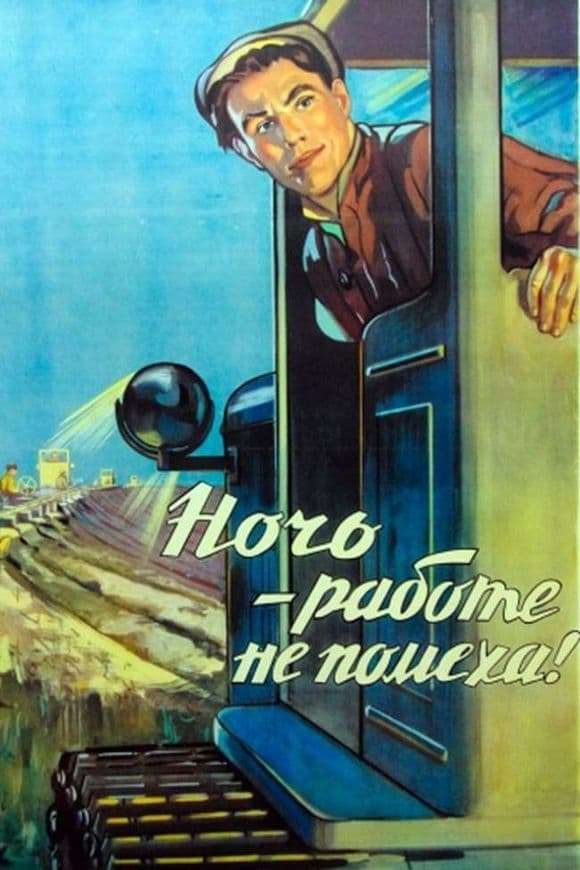 One of the strengths of the Soviet government was a powerful agitation policy. Loud slogans were made from the stands, which were information weapons. They strongly motivated citizens, set the society to the correct thinking.

Soviet people remember all these campaign slogans to this day. Of course, posters played a huge role in this policy. They were hung throughout the country: on the streets, factories, clubs and other public places. Everywhere on people watched a decent man, a hard worker.

The poster “Night at work is not a hindrance” is one of the clearest examples of such agitation. It was created for agricultural workers, but served as a good propaganda for other industries. The labor of an agricultural worker is hard, and the authorities, of course, understood this.

Plowing land at night in the field is not weak people. And in order to motivate the workers, a poster was created showing an agricultural worker proud for his work. He illuminates the night darkness with a bright spotlight, thereby facilitating the work of his colleague.

The face of the man is full of confidence, it is open and bright. What showed everyone that people worked in the USSR who knew that they were creating a great country. And agriculture has always been one of the greatest strengths of our state.

Such posters would be relevant in our time, when night work has become the norm. Many production work around the clock, of course, people get tired. But when there is support, the right and strong motivation, the work becomes much easier. A person does not forget for a moment the goal to which he aspires.

Soviet times are long gone, but many of us utter the words of our long-time catch phrase in our everyday life. Many of them were once written on propaganda posters. They motivated then, they do it now.