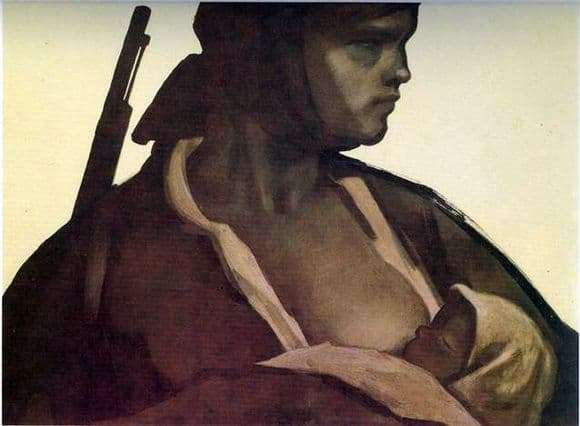 The image of the mother and her child throughout all time was a source of inexhaustible creative ideas and inspiration of various artists. The love given by the mother does not know the limit or the end, and therefore this topic will always be popular and worthy of chanting.

The painting “Mother” by the artist Boris Prorokov, which was part of a series of his grandiose works, was created in 1958. Soviet art, the middle of the last century, mainly covered the themes of war, politics, morality and socialism. In the creation of Prorokov, “Mother” feels echoes of the war recently experienced by people, as well as the author’s disposition against violence and terror in the name of children and the bright future of the whole country.

The painting depicts a young mother who feeds her breast wrapped in a blanket and a diaper baby. Her hair is hidden under a kerchief, and her shoulders are covered by a pea-jacket. It speaks of cool weather. From the expression of a woman’s face, it is clear that she has a strong and lively character, who could not be broken by serious trials during the war.

The position of her head and rather sharp facial features can speak of dedication and the hope of moving only forward, but, nevertheless, in her view, alertness and sad thoughtfulness slip in her eyes. The viewer can feel her tenderness and anxiety for her child, the desire to protect him regardless of any circumstances. For this, a woman holds a weapon on her right shoulder. Her whole image is filled with vitality, determination and spirituality.

Boris Prorokov introduced new ideas of his modernity into the image of motherhood. The picture is more like a propaganda poster and designed in two-color contrast. It brings to mind memories of military times, and also makes you think about how exactly they affected the character and life of the Russian people.